Premier Colin Barnett will be forced to undertake another cabinet reshuffle in the lead up to May's state budget after the resignation of Treasurer and Transport Minister Troy Buswell. 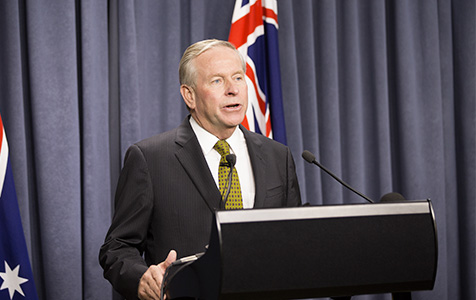 Premier Colin Barnett will be forced to undertake another cabinet reshuffle in the lead up to May's state budget after the resignation of Troy Buswell as treasurer and transport minister.

The premier announced today Mr Buswell had resigned from cabinet after a psychological breakdown, which resulted in him being hospitalised and transferred to a clinic in Sydney.

Mr Barnett told reporters he had accepted Mr Buswell's resignation after a phone call yesterday during which the member for Vasse confirmed reports that he had crashed his ministerial vehicle while driving home from a wedding late last month.

Mr Buswell has been on personal leave since the February 23 incident and is still receiving medical treatment, but is no longer in hospital.

The premier today said he was "personally concerned" about Mr Buswell's wellbeing.

"Troy's had a turbulent career," Mr Barnett told reporters. "He's had a lot of issues in his life. Tragically, it may have all been too much.

"People close to Troy recognised that he was vulnerable but there was no indication he was headed for a breakdown."

Media reports overnight said a crash had been witnessed outside Mr Buswell's Subiaco home on February 23, with police attending the scene shortly after.

Mr Buswell is reported to have been drinking at a wedding earlier that night before driving home.

However Police Commissioner Karl O'Callaghan today said the responding officers were not aware that the driver was Mr Buswell and had chosen not to investigate further, despite the complainant joking that the driver in question "looked like Troy Buswell".

Mr O'Callaghan said that he was not aware of the alleged incident involving Mr Buswell until his office received media queries yesterday.

Mr O'Callaghan said the car had been locked up when officers arrived at the address, the unit was in total darkness and there were no signs of damage.

The commissioner said that he would speak to the officers to determine whether they should have investigated the incident further.

The incident is being reinvestigated but with no blood alcohol readings taken, Mr Buswell will not be charged with drink-driving offences.

It is not immediately clear whether the accident triggered Mr Buswell's breakdown.

The premier said he was contacted by Mr Buswell's chief of staff, Rachael Turnseck, on the day after the crash and informed that Mr Buswell had suffered a breakdown.

However, he said he only learned of the accident yesterday when contacted by Mr Buswell.

Police Minister Liza Harvey told the premier she was only informed of the incident late yesterday afternoon.

Mr Barnett did not tell members of cabinet or the Liberal partyroom about Mr Buswell's breakdown.

The premier said he did not regret keeping Mr Buswell in cabinet throughout the last few years, despite repeated incidents of questionable behaviour.

"He is a brilliant person."

The premier will take over Mr Buswell's treasury and transport portfolios for the short-term, but said he has not yet decided whether he'll keep the portfolios.

Mr Buswell's resignation is the latest blow for the Barnett government, which has lost several senior ministers over the past two years.

Former treasurer Christian Porter resigned from his ministerial post in 2012 to fight for a seat in federal parliament, which he secured last year.

Former regional development minister and Nationals leader Brendon Grylls, meanwhile, stepped down to the backbench in November last year, saying he believed it was the right time to hand over the reins of the party to a new leader.

Mr Barnett told reporters today he still holds out hope that Mr Grylls will one day return to cabinet.

Mr Buswell will remain in his position as MP for the seat of Vasse, with a decision on a ministerial re-shuffle not due until the end of the week.

Mr Barnett said at the time that he had been aware of Mr Buswell's condition "for some time" and asked that the media respect his privacy.

Mr Buswell was forced to resign as opposition leader in 2008 following revelations of inappropriate behaviour including snapping the bra of a female staffer, sniffing the chair of another staffer and making sexist remarks to a Liberal MP.

In 2010, he was stood down as treasurer after it emerged that he had been having an affair with then-Greens MP Adele Carles.

Mr Buswell was reappointed to cabinet in 2010 but continued to attract attention for the wrong reasons, coming under fire for racking up a number of speeding infringements.

He was reinstated as treasurer in June 2012, with Mr Barnett saying he planned to "ride him harder than Black Caviar".

More recently, Mr Buswell settled a defamation case against Ms Carles regarding statements she made reflecting on his boisterous behaviour at the home of Perth businessman Nigel Satterley.

The government is due to hand down the state budget in the first two weeks of May, with the cut-off for many details to be contained within the document to be determined by mid-April.