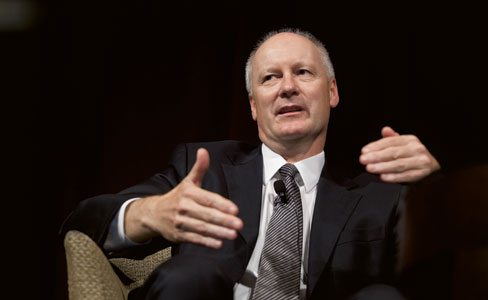 Wesfarmers chief executive Richard Goyder says the tone of the national conversation has become too pessimistic, challenging business leaders to embrace the opportunities created by Australia’s strong economic conditions and proximity to Asia.

Mr Goyder told guests at a WA Business News Success & Leadership breakfast in Perth this morning that he considered Australia “the best place in the world for doing business” and he wouldn’t want to operate anywhere else.

“I worry about the tone of conversation in Australia at the moment,” he said.

“I think there’s a degree of pessimism about things that I think is unwarranted. We’re an economy that’s had something like 20 consecutive years of growth, we’ve got a highly educated workforce, we’ve got strong employment and low unemployment, we’ve got a Reserve Bank that I think is well-run, well-governed and has got plenty of firepower.

“Like it or not, the federal government’s probably going to be pretty much in fiscal balance this year, unlike most governments around the world and we’re at the doorstep of the growth economies of the world. So I’d say the opportunity is all ours to actually do some really good stuff.”

"Australians are the last people who should be looking at government to sort out our problems."

Mr Goyder told shareholders at Wesfarmers' annual general meeting last week that the company was "hopeful for a positive trading outcome in the retail businesses during the important Christmas period".

In an expansive conversation with WA Business News editor Mark Beyer, Mr Goyder spoke about his rural upbringing, “transforming” Wesfarmers with the takeover of Coles and his future at the helm of the company.

A comprehensive wrap of Mr Goyder’s appearance at the Success & Leadership breakfast will appear in next Thursday’s print edition of WA Business News.