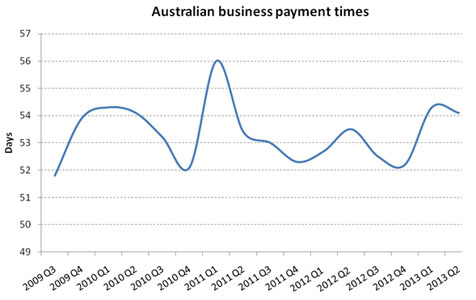 Australian businesses are taking longer to pay each other in 2013 compared to a year earlier, in an indication that their level of financial health has not improved, according to credit bureau Dun & Bradstreet.

Despite edging down in the June quarter, businesses are taking 54 days to settle their accounts this year according to analysis of more than 8 million trade payment records. Business payment times provide accurate insight to the financial health of businesses – those with available cash tend to pay their accounts in a timely manner, while cash-constrained businesses pay late.

After trending at around 53 days from mid-2011 until the end of 2012, payment times have edged up during 2013, suggesting that business cash flow remains an issue.

These findings, from D&B’s Trade Payments Analysis for Q2 2013, reveal the challenging conditions being negotiated by companies and highlight the relevance of the Australian Government’s discussion paper on improving small business cash flow, which was released in July.

After increasing steadily following the global financial crisis, trade payment times in Australia improved through 2011, and again in mid-2012. These improvements, however, have been reversed across the past six months in particular, as the pressures of the current business environment impact the capacity of companies to pay their costs.

“The slowdown in the time that businesses are taking to pay each other during 2013 suggests that business conditions are not improving, and the proximity of a genuine economic pick-up is still some time away,” said Dun & Bradstreet CEO Gareth Jones.

“Despite low interest rates making access to credit more affordable, businesses’ ability to pay their invoices in a timely manner appears to be deteriorating in the face of weak sales activity and high operating costs.

“A slow cash flow cycle can be a vicious cycle – when one business pays late, it can force the other to delay its own payments until it has money available. This pattern appears to be at play within the business community at the moment”.

“This is particularly concerning because of the strong link between cash flow problems and business failures,” Mr Jones added.

According to findings from D&B’s most recent Business Expectations Survey, 67 per cent of businesses expect that cash flow will be an issue for their operations in last quarter of 2013.

At an economic level, Australia’s slow payment cycle is withholding millions of dollars of cash from the system at a time when growth and business activity is weak. The effect of this is especially pronounced among small businesses, which rely on trade credit to pay for operating expenses.

This impact of slow payments on small businesses has been highlighted by the Australian Government, which is consulting on how to improve small business cash flow and strengthen business relationships. The government has released a discussion paper on a Prompt Payment Protocol, to help generate ideas about how to address the issue of late business payments.

At an industry level, D&B’s Trade Payments Analysis shows that businesses in the retail and mining sector have been the slowest to settle their accounts, taking 57 days, while utilities companies have taken 56 days. The nation’s fastest paying companies during Q2 have been those from the transportation sector, which have paid their business accounts in an average of 50 days.

According to Dun & Bradstreet economic adviser Stephen Koukoulas, the news on payments times is open to a number of interpretations.

“An optimist would say the consolidation in payment times in the June quarter, at a level below the 2011 and GFC peaks, is a sign that low interest rates are slowly making their mark,” Mr Koukoulas said.

“However, a pessimist would note that payment times remain somewhat elevated and that there is a risk they rise further if the rate of economic growth remains below trend”.

“Further interest rate cuts from the RBA and the lower Australian dollar will no doubt boost business conditions, with a lag, so there are grounds to expect payment times to fall back in the next six to 12 months,” he noted.