IF prominent businessman Michael Chaney's actions are anything to go by then Western Australia's corporate sector is poised to enhance its social responsibility through the new Centre for Social Impact at the University of Western Australia. 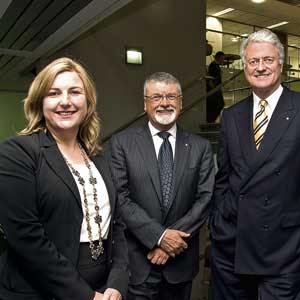 IF prominent businessman Michael Chaney's actions are anything to go by then Western Australia's corporate sector is poised to enhance its social responsibility through the new Centre for Social Impact at the University of Western Australia.

At an event last week launching the CSI - a national network of university business schools across the country that aim for academic excellence for a social purpose - as UWA's chancellor, Mr Chaney literally put his money where his mouth is.

After the opening song by the 'Spirit of the Streets Choir', predominately consisting of homeless vendors of The Big Issue magazine, Mr Chaney was approached by one such seller who was interested in making a sale.

The National Australia Bank and Woodside Petroleum chairman was only too happy to oblige and purchased a copy of the magazine; a simple gesture, but one that is indicative of his stance on the corporate world's social responsibility.

"The most satisfying thing you can do is help other people," Mr Chaney told WA Business News.

And while big business is often attacked for its lack of ethics, especially in light of the global financial crisis, Mr Chaney is adamant the big end of town is providing valuable and largely unheralded community support.

"I think they're [big business] doing a huge amount that you generally don't hear about," he said.

"Almost all large companies have very serious social support programs and they go right across the board through education and health and community welfare generally, and sport as well, and generally it's a light under the bushel."

The CSI mission is to ensure that teaching, research and facilitation contribute to public debate and build cross-sectorial alliances that drive social innovation and entrepreneurship.

Headed by Macquarie Group Foundation's Peter Shergold, who was previously the secretary for the Department of the Prime Minister and Cabinet in Canberra, the CSI works with governments, private sector organisations, community benefit sector organisations and philanthropists to engage with the community.

Professor Shergold said the CSI would inform the development of public policy and UWA would contribute largely through its events, executive programs and action-oriented research.

As such, the university is planning to make it compulsory for every UWA student to take a unit of community service when its new course structure is introduced in 2012.