Business as usual in wielding of influence 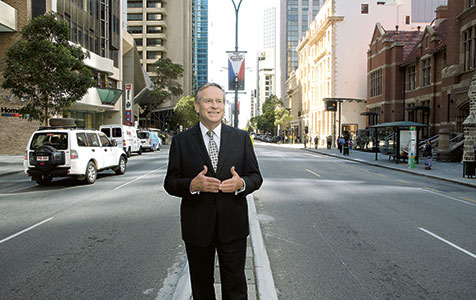 THE near certainty of a Coalition government being elected in September, and the single-handed control of state leader Colin Barnett, have reshaped Western Australia's 2013 Most Influential list – squeezing out other state ministers (bar Troy Buswell) from our top echelon.

Mr Barnett is even more central to state political control following his election win earlier this year and, if as expected, the Liberals win federally, powerbroker Mathias Cormann and deputy liberal leader Julie Bishop will have real national clout.

Iron ore remains the single biggest business influence in WA because it creates the most jobs and generates the most revenue for the state government, but it is increasingly jostling with LNG as a central industry.

Fortescue Metals Group's Andrew Forrest will be more reliant on the price of iron ore than others in his field, such as Jimmy Wilson at BHP Iron Ore and Hancock Prospecting owner Gina Rinehart, who is a major partner of Rio Tinto but remains a force.

Rio CEO Sam Walsh may have departed WA, but his influence will still be huge until his successor Andrew Harding lifts his profile.

Chevron Australia's Roy Krzywosinski is overseeing the two biggest projects currently being undertaken in WA, Gorgon and Wheatstone, while Woodside boss Peter Coleman is putting his mark on what is almost a de facto state oil company.

IRON ore remains Western Australia's number one industry despite an anticipated slowdown in demand for the commodity and a rapid cutting back of both new and brownfield projects.

Its huge expansion of the past decade and, for the time being, relatively healthy prices means it is the mainstay for the state government's coffers – its single biggest income source.

However, cost cutting by miners could lead to politically unpalatable events. Lower prices also make some of the players more vulnerable than others, a factor that lessens their influence after many years of throwing their weight around.

It is worth noting the emergence of Woodside CEO Peter Coleman, who has strengthened his influence since coming on the scene in 2011.

He has climbed at the expense of his chairman, Michael Chaney, who remains a nationally influential figure but appears near the end of his major non-executive period, in his seventh year with Woodside and eighth as chancellor of the University of WA and chair of National Australia Bank.

Increasingly, oil and gas is perceived as offering a rich vein of potential for WA, most notably in skills retention as LNG moves into floating technology, where the state is at the vanguard.

Mr Coleman may have disappointed some by shelving the James Price Point project near Broome, but he is seen as leader of the local petroleum industry with the control over his own destiny and that of others in the longer term.

"Woodside is the closest thing Australia has to a national oil company," one observer said.

"It makes him (Mr Coleman) and the company quite influential in their ability to back words with actions."

Chevron Australia chief Roy Krzywosinski, in charge of projects worth more than $80 billion, weighs in heavily in influence because his spending will keep the doors of many businesses open as other resources options close down.

Another important face in oil and gas is Eric Streitberg, with his role as leader of Buru Energy putting him at the forefront of the potentially huge unconventional gas sector.

The names are equally familiar back in the iron space. Gina Rinehart, regarded as the world's richest woman, is one of them; Andrew Forrest is another.

The departure of Sam Walsh to London has forced the re-evaluation of what it means to be influential in WA. Hinting at the true globalisation of industry here, Mr Walsh remains near the top of our list, the first foreign resident to do so, because of his recent close ties and remaining control of the state's biggest iron ore operation.

Jimmy Wilson at BHP Billiton Iron Ore has gained in influence over the past two years. He succeeded Ian Ashby, a very low-key operator, and has already taken on more community roles than his predecessor.

Of the locally led iron ore groups, Mrs Rinehart appears the most comfortable.

The accounts of her company Hancock Prospecting show it made an operating profit of $1 billion in the year ending June 30 2012, based largely on the royalty flows from low-cost mines operated by Rio Tinto.

That is cash, not just paper wealth.

Against that, Mr Forrest, worth a cool $3 billion-plus in stock, relies more heavily on the iron ore price remaining high.

His firm, Fortescue Metals Group, is much more expensive to run and, therefore, at greater risk if China stops buying.

He has put in place an able executive in Nev Power to run his company and has become involved in some huge charity initiatives, which could well alter how his influence is perceived if they truly come off.

His interests in earth-moving equipment and his weighting to WA assets is an indirect China bet.

But having control of a daily newspaper, albeit in a dying sector, and a national TV station does make him very influential beyond the financial success of those businesses.

IF Tony Abbott's win in the September 14 election is inevitable, then so will be the rise in power of his key Western Australian lieutenant, Senator Mathias Cormann.

Senator Cormann featured in Business News' Most Influential 2012 but his stocks have been on the rise as the Julia Gillard government has floundered during the past year, failing to land a significant punch on the opposition.

The WA senator has been a successful and public part of the exposing of federal Labor's flaws, playing a big role in the dry but crucial field of finance.

His Belgian accent may not be a political asset but it is also difficult to forget.

But it is not only federal success that has helped elevate Senator Cormann and his colleague, Julie Bishop, who is expected to get a top role, in terms of influence.

As an early convert to the wave of Liberal election wins and home to a rich resources sector that has been attacked by federal Labor, WA has been a powerful source of political funds that have given those at its helm at distinct advantage in the influence stakes.

Ms Bishop is known as a mighty fundraiser in her own right. Senator Cormann, along with his state colleague and WA Education Minister Peter Collier, control a big part of the lay party branch network, which selects candidates and funnels money into electioneering.

"There is only one faction in WA," a political observer in the know said.

"It is the Collier-Cormann faction."

While the Liberal Party's back-room power is not as significant as the union-led factions in Labor, it still has considerable influence, especially when there is little competition from alternatives.

Of course, that is just the background.

In the foreground, Premier Colin Barnett has heightened not just his political stocks but also the perception that WA is now a one-man show.

Most of those who were able to knowledgeably discuss the power structures within the state government highlighted the strengthened grip that Mr Barnett has taken on power.

While his reign is likely to be limited because of the late point in his career at which he took the premiership, talk of succession has already turned to newcomers in the ranks such as Environment Minister Albert Jacob, rather than that of the once-fancied but perpetually troubled treasurer, Troy Buswell.

Mr Buswell, who until recently was seen as a contender for the future state leadership with former attorney-general and treasurer, Christian Porter, does not appear to have benefited significantly by his rival's switch to the federal sphere.

Instead, the huge state Liberal victory in March has given Mr Barnett the breathing space to groom alternatives while running the government single-handedly, according to those close to the action.

This, of course, could be his undoing.

But, at the moment, he has yet to allow this control to develop into serial mistakes.

Many have noted the big pay rises given to his key advisers and staffers, such as media chief Dixie Marshall and close confidante Narelle Cant, as a signal that the premier's power base is reliant on those around him.

It's a list that includes chief-of-staff Brian Pontifex and directors general of the departments of Premier and Cabinet, Peter Conran, and State Development, Stephen Wood.

Mr Barnett is the key force behind major initiatives in government although others will oversee them. Most notably, there is the proposed re-merger of power generator Verve Energy and electricity retailer Synergy, to be headed by new Energy Minister Mike Nahan.

Then there is the election promises around public transport, such as the $2 billion light rail network, which is already threatened with delays, less than three months after the poll.

That sits with Mr Buswell, who as transport minister must balance his need for a political win against the cost to the state in his role as treasurer.

The MRA is driving several of the premier's pet projects such as Elizabeth Quay and City Link.

With new minister Tony Simpson given the local government portfolio, and the job to renew the effort to encourage council mergers, the planning fiefdom could prove quite influential in the early years of the Barnett government.