Burswood style peaks at The Crest

The Springs in Rivervale is just the start for high-density apartment projects on the Burswood Peninsula. 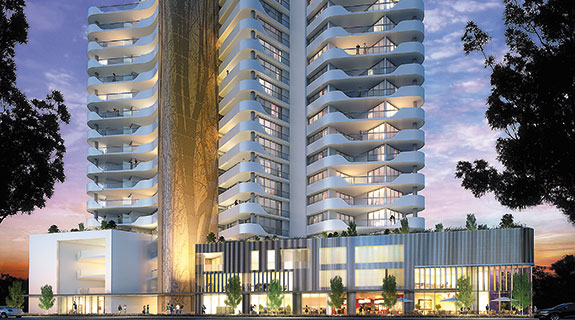 EYE-CATCHING: Norup + Wilson’s The Crest has been lauded for its innovative incorporation of public art into the building’s design. Photo: Norup + Wilson

The Springs in Rivervale is just the start for high-density apartment projects on the Burswood Peninsula.

A landmark apartment building is expected to set the tone for further development on the Burswood Peninsula, following the release of the Western Australian Planning Commission’s long-term strategic plan for the area.

The WAPC’s draft structure plan, unveiled last week, calls for the development of three neighbourhoods on the peninsula – at Belmont Park, around Burswood Station, and at The Springs.

Across the whole peninsula, the WAPC is expecting 12,500 apartments, 250,000 square metres of commercial space and 65,000sqm of retail development over the next 30 years.

Of course the area will also have a significant tourism drawcard, not only in the 60,000-seat Perth Stadium, but also the Crown Casino, where Brookfield Multiplex is building the six-star, 500-room Crown Towers.

And while development at The Springs is already well advanced, the first apartment project at the new Burswood Station precinct has just won approval to proceed from the metropolitan central development assessment panel.

The $100 million project, The Crest, is the latest from boutique developer Norup + Wilson; the 21-storey, 182-apartment development is located at 112-118 Goodwood Parade in Burswood.

It was approved despite a building height of more than 68 metres, well over the Town of Victoria Park’s limit of 15 metres for the area.

However, the scale of the development is considered to be in line with the WAPC’s plan, and was strongly supported by the Town of Victoria Park.

Once fully developed, the WAPC expects the Burswood station precinct to comprise about 4,500 dwellings and 160,000sqm of office or commercial space.

The Department of Planning and the Town of Victoria Park are currently developing a master plan for the precinct.

However Norup + Wilson director John Norup said the developer’s project, designed by Woods Bagot, would act as an incubator for what could be achieved in the area.

“They’ve really identified our site as a landmark site, being right at the crest of the hill and right opposite the train station, so it will actually ignite the building design and the aesthetics of what they’re hoping for in the area,” Mr Norup said.

“The vision of the Town of Victoria Park is extraordinary and we’re pleased they’ve acknowledged our design as one that will set the tone and the benchmark for others to strive towards.”

Part of the building’s design incorporates a 20-storey piece of artwork, with Norup + Wilson embracing the public art requirements to create a standout development.

Mr Norup said Woods Bagot, which the developer contracts to design all of its projects, had used its international expertise to create a statement building.

“They’ve absolutely hit the nail on the head documenting our vision for the site,” Mr Norup said.

“Having a firm with offices in Dubai, London, all through the east coast, the US and Asia, we’re getting all of these influences and its’ been an amazing effort by Woods Bagot.”

Mr Norup said building design was becoming increasingly important for developers to stand out to buyers in the ultra-competitive apartments market.

“It’s the same when you’re buying a house,” he said.

“The first thing you do if you’re buying a home (is) you drive past the house, and if you don’t like the look of the house you keep driving and you don’t actually go into the home.

“When you’ve got choices for apartment buildings, purchasers are savvy and their first question is ‘is this a good looking building?’

“For resale value it is important, because people want to live in a beautiful building.”

Mr Norup said pricing of the apartments at The Crest had not been finalised, although he suggested they would be in line with current offerings available at The Springs.

A timeline for marketing and construction will be announced in coming weeks, he said.

The Burswood Station precinct is likely to be a similar size to the Belmont Park neighbourhood, planning of which is being advanced by Golden Group.

In all, it’s proposed 4,500 dwellings will be built around the Belmont Park Racecourse, as well as 60,000sqm of office space and 31,000sqm of retail area.

The project is also flagged to have a major entertainment and hospitality precinct, designed to complement the upcoming 60,000-seat Perth Stadium, which is under construction and scheduled to open by early 2018.

Earlier this year, Golden Group managing director Andrew Sugiaputra told Business News sales for the first stage of apartments at Belmont Park would likely be launched in July or August.

Mr Sugiaputra said design was a significant focus for the developer, with Golden Group aiming to bring something to market that hadn’t been seen in Perth previously.