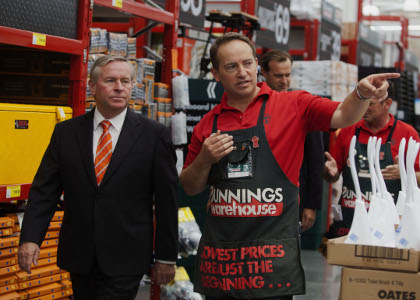 Hardware giant Bunnings has announced it will invest $135 million dollars in network expansion in Western Australia, at the opening of its new store in Armadale today.

Bunnings has said the new store, which cost around $37 million to establish will employ around 115 people.

Bunnings managing director John Gillam said the timing was right for Bunnings to expand in the state following the deregulation of retail trading hours.

“For 30 years the business has chosen to trade under the restrictions that exist for special shops so we could enjoy the freedom of being able to open on Sunday," Mr Gillam said.

“But now that there are trading hours for specialty shops, we thought it was a really good time to bring the full product range to WA.

“We’ve always wanted to sell everything else we sell in the rest of Australia and New Zealand here in our home state."

Bunnings has also announced it will build new stores in Clarkson, Ellenbrook and Joondalup, and Mr Gillam said there was more room in the WA market to expand.

“There are hopes for more stores in the northern suburbs, and the eastern and southern corridors, as well as in the regions," he said.

“We’re actively looking for more sites to grow the business in the state.”

When Bunnings looks to expand, Mr Gillam said there are two important considerations.

“Our first thought is to put stores where they are compellingly convenient for the communities they’ll serve,” he said.

“For the investment to build and create the store, we ask whether the store will provide us with an appropriate return over 10 years, in line with Wesfarmers Group thinking.

“That’s the heart of our network thinking.”

Mr Gillam told WA Business News that Bunnings has plans in the “foreseeable future” to open 10 to 14 new warehouses, two to four stores and some trade centres.

Mr Gillam said the concerns of some groups that believe the presence of a large Bunnings store in an area was detrimental to smaller business was “a falsehood”.

“I can understand why people think it,” he said.

“But every time we build a store a host of small businesses spring up within two or three years around us and that happens again and again.”

In response to the expansion of rival hardware store Masters, Mr Gillam said the company would continue to “innovate and create things that are exciting and new, and try and remain a strong part of the communities we’re in”.

“We know people have choices, so we study and try to understand those choices and then strive to come up with the best offer.”

Bunnings also has plans for expansions of its Subiaco and Claremont stores, which include converting the store at Homebase in Subiaco to a two-level warehouse.

“What some people are failing to see with the Subiaco plan is that if they don’t create the environment for us to have a home now, the existing site will be there for the next 10 years.

“I think what the Subiaco Council has proposed for the site is very visionary and totally in line with the aims of the Subiaco redevelopment.”