Bunnings bets each way in Australia and the UK

OPINION: Bunnings is running two contrary strategies in Australia and the UK as it takes an offensive defensive posture against Amazon. 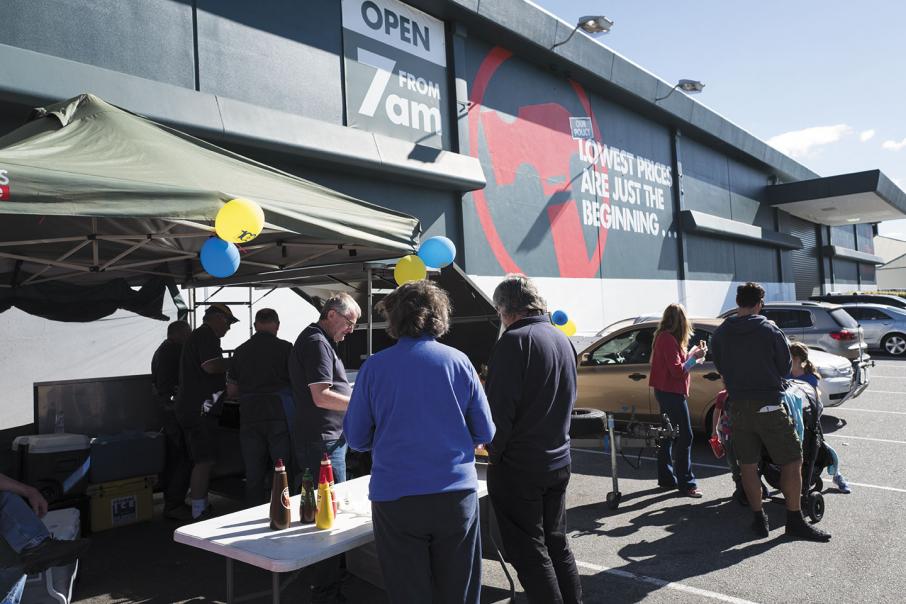 Bunnings management believes Australian customers prefer to visit their local outlet for instant collection of their paint, tools, and a sausage in a roll. Photo: Attila Csaszar

Is Amazon’s bark worse than its bite?

That question worries some investors, who are ducking for cover ahead of the full-blown arrival of the US internet retail giant, and others confident that the sell-off in big-name retailers such as Harvey Norman and Myer has gone too far.

While no-one knows exactly how Australian consumers will embrace the Amazon offering, the online player has won most (if not all) previous clashes of a traditional bricks-and-mortar business and a no-frills e-commerce offering with home delivery.

Cost, convenience and choice are the three Cs that make up the winning hand held by internet retailers.

Investors and consumers in Western Australia are traditionally left on the sidelines when there is a big change in a business such as retailing. However, the looming battle for shopping supremacy will have a very WA feel to it, and be watched carefully by investors in Australia and overseas.

There are two reasons for WA’s rise in importance in the game of Amazon versus the rest of the world:

• Australia’s biggest retailer, Wesfarmers, with its multiple brand names that include Coles, Kmart, Target, Bunnings and Officeworks, is based in Perth; and

• one of those retailers, Bunnings, is conducting a unique experiment that comes straight from a medical research handbook and goes to the heart of the nature versus nurture debate: how do twins react to different environments?

Bunnings management has decided that its Australian business does not require an internet offering, whereas its British business does.

Which tactic ultimately proves to be correct will tell the world, not just Wesfarmers, whether the Amazon giant can be stopped by sticking to a shopfront-only offering, or whether it is essential all forms of retailing embrace e-commerce.

Investment analysts are wary of the Bunnings experiment in running two forms of defence against Amazon, especially about a claim that Australian customers prefer to visit their local Bunnings for instant collection of their paint, tools, and a sausage in a bread roll.

British consumers, we are told, are quite happy to order online and wait for delivery, and are therefore better suited to a full internet offering.

Why there should be such a profound difference between Australian and British home renovators is a question no-one has successfully answered, leaving open the possibility that they are not different at all and Bunnings is making a mistake in not going down the internet road in Australia.

Perhaps one reason for Bunnings sticking to its warehouse formula is evidence of the British being more comfortable with the internet. According to research by the consulting firm AT Kearney, the internet has captured 18 per cent of British retail, more than the 14.8 per cent in the US, with both well above Australia’s 8.4 per cent.

As interesting as those market share figures are, it is likely that Australia is simply trailing behind a global trend, as has often happened in the past with the slow arrival of television an example. Once a technology is available, however, Australians stampede to embrace it.

It is not easy to make a direct comparison between Amazon’s hardware department available to US shoppers and Bunnings in Australia because of the size of the two markets and currency differences.

However, a visit to the power tool section of Amazon’s US website and the Bunnings website shows that they have a lot in common, with the difference being you can shop on one but not the other.

Exactly what Amazon will offer when it opens for business in Australia is not yet known, but the level of concern it has created by simply talking about entering the market is being reflected in sharp share price falls over the past year.

Harvey Norman, for example, is down 33 per cent from its 12-month high. Myer is down 39 per cent, and Wesfarmers is down 11.8 per cent, a relatively modest fall that either highlights the financial strength of the business, or means it has further to fall in the months ahead.

What particularly worries investment bank analysts is a point I’ve made before, that launching Bunnings in Britain last year was a courageous move given what’s happening on the home front, where competition is accelerating more rapidly than ever before.

It’s the recovery of Woolworths, the rise of Aldi and the threat of Amazon that is probably occupying most management time at Wesfarmers, while the more interesting test is whether the business that generates the most generous profit margins, Bunnings, is an international e-commerce experiment.