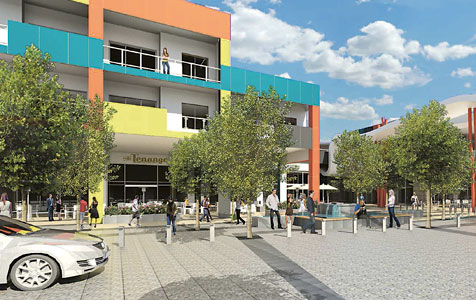 UPMARKET: An artist’s impression of the streetscape at the new Eaton Fair Shopping Centre. Image: Citygate

Closer to Bunbury CBD, Atlas Point’s Bunbury Forum is also undergoing a five-stage redevelopment and is on the market, reportedly for $130 million.

It is believed Charter Hall, Queensland Investment Corporation, and Industry Superannuation Property Trust are interested in buying the 22,000 square metre centre, which opened in 1980.

Bunbury Forum underwent two refurbishments and extensions in the 1990s and has completed the first stage of the current upgrade.

Atlas Point had a win recently when the City of Bunbury council, on a second revision, agreed to support its application for its second stage redevelopment, which will include a department store.

Atlas Point had previously gone to the State Administrative Tribunal to secure planning approval after the council ruled a “deemed refusal” for the expansion.

Bunbury Forum is currently anchored by a Big W and Woolworths and has more than 60 specialty retailers.

When Eaton Fair’s redevelopment is completed it will be the only shopping centre in the area with both a Woolworths and Coles.

It is proposed the supermarkets will trade from 6am to midnight, seven days a week.

Citygate has handed BGC a tight deadline, requiring the construction of an additional 17,500sqm of lettable space, making a total of 24,000sqm, completed by mid August of next year.

The redevelopment of Eaton Fair was due to begin construction in 2012 but was delayed due to design changes and negotiations between new tenants, Coles and Kmart.

Eaton Fair is within the Dardanup Shire and Citygate director Geoff Prosser said the area differed from Bunbury in that it had a younger demographic than the state and national average, and high household incomes.

Mr Prosser, who was a minister during the Howard government years, said the redevelopment sought to appeal to shoppers who he said had become more sophisticated and had higher expectations.

“If you keep a touch of pizzazz and excitement … shopping’s got to be an exciting and enjoyable experience,” he said.

“If people feel under pressure or cranky because the car parking spaces are too tight or they’re too far away, they’ll go elsewhere.”

Mr Prosser said the planned redevelopment of the 12-year-old centre was one of the first shopping centre proposals approved under the new state planning policy 4.2 for activities centres.

Shower and change room facilities have been planned at Eaton Fair for staff to ride their bikes to work, and charging stations have been designed for shoppers who ride mobility scooters.

The shopping centre will include 12 residential one- and two-bedroom apartments overlooking a ‘town-centre’ area, which will have a small bar and a cinema.

Building and managing apartments is a first for Citygate, which also owns and manages the Bunbury Homemaker Centre and Minninup Forum.

Citygate has City of Bunbury council approval to carry out a minor refurbishment at Minninup Forum, at a cost of $1.2 million.

It is spending $3 million at Bunbury Homemaker Centre adding an office block development in addition to recently completed offices and a First Choice Liquor store.

Mr Prosser said redeveloping shopping centres in Bunbury was difficult due to approvals processes and constraints related to existing buildings.

“The mistake that sometimes property managers, owners and councillors, not the Dardanup Council, but some councils that one deals with, is they’re comfortable with how things used to be and that will never happen,” he said.

“If you don’t keep moving with the times and delivering to the marketplace and shoppers and customers what they want, they’ll go elsewhere.

“All of the other shopping centres in Bunbury, including a smaller one we’ve got out at Minninup Forum, and we’ve got another one over in East Bunbury (Homemaker Centre) … we built them 20 years ago and I would love to flatten them and start again but we can’t.

“The problem with existing centres, and this is not a criticism, this is fact, and is exactly the problem I’ve got with Minninup Forum, an existing centre, you don’t get the chance for a clean canvass and that’s nearly what I’ve got at Eaton Fair because we’re able to build onto the existing centre.

“Luckily ... I now have some six hectares of land to actually build essentially a new centre,” Mr Prosser said.