Brookfield Property Partners is shifting its focus to new developments in Perth as the final piece of the puzzle is finished at Brookfield Place, with construction complete on the precinct’s second office tower. 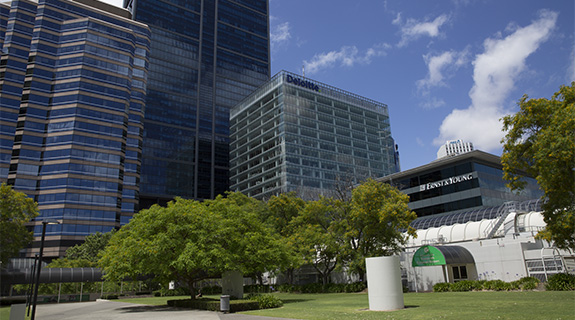 The second tower at Brookfield Place has slotted nicely into Perth's skyline.

Brookfield Property Partners is shifting its focus to new developments in Perth as the final piece of the puzzle is finished at Brookfield Place, with construction complete on the precinct’s second office tower.

Brookfield Place Tower 2 will be officially opened this evening, at a gala ceremony which will be attended by Premier Colin Barnett, among other dignitaries.

The 16-level office tower is about 70 per cent leased, with accounting firm Deloitte, law firms Corrs Chambers Westgarth and Ashurst, as well as Wesfarmers as its anchor tenants.

Brookfield Multiplex has also taken up a floor in the building, and is the first tenant on site, having already relocated from its former office at the Old Swan Brewery on Mounts Bay Road.

Brookfield Property Partners Australian office division chief operating officer, Kurt Wilkinson, said it had been a huge year for the global office development giant, which would now seek to bolster its development pipeline across Australia, including in Perth.

"We’ve got three sites here that we can build on, and we are looking to harvest some capital from our mature investmetns around the country to look to recycle back into growth initiatives like the development pipeline," he said.

"We see the next two or three years for our business as a really strong growth period for us, primarily focused on development.

“The product we are sitting in today is testament to the type of product that we deliver, not just in Australia, but quite typical of what we do deliver around the globe in cities like New York, Toronto and London,” he said.

“It’s been a long-term vision of ours to create a precinct like this, and we do like to draw parallels to our portfolio because there are not many people that have the capabilities that we do on a global scale.

“Not only do we get recognition nationally here on this project, about how fantastic it is on a national basis, but we do get a bit of recognition globally, not just in our own business but from our peers, of the significance of this project and the impact that it has had on Perth and the way that’s it’s recognised in Australian commercial property.”

Mr Wilkinson said the 2,100 square metre, wide open floor plates at the second tower had proved attractive to its tenants.

“Some of the tenants that have moved in here have moved into two floors, but they’re big floors and they’re coming out of six,” he said.

“So from an operating efficiency perspective for their business it makes a huge difference to be able to move out of six floors and into two.

“In a lot of cases that will save them space as well, so that will give them not just operating efficiencies, but also better connectivity for the people in their business.”

Brookfield Property Partners Australian office division head of development, Carl Schibrowski, said the tenant profile was a good counter-balance to the other tower at Brookfield Place, which was heavily weighted to BHP Billiton.

He said enquiry for the four empty floors in the building remained robust, despite Perth’s depressed office market, where vacancies have been tipped to rise to more than 24 per cent of all stock.

“In Perth there has been a flight to quality and with the market being down a little bit, there is no reason to stay in a B or a C grade building,” Mr Schibrowski said.

“The best in class is less likely to have a vacancy when the tide is out a little bit and that’s been proven.

“There’s no reason to give any floors away, we’ve got three tenants running at the moment, and we’re hopefully looking to lock down one or two of those as well.”