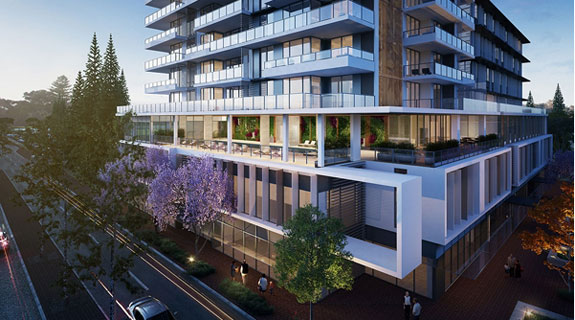 Construction on Chinese developer JianHe Jian Group’s $100 million residential and commercial project opposite Perth Zoo in South Perth is expected to begin later this month, after local builder JAXON was signed up to carry out the works.

JAXON said it had received a letter of intent from a subsidiary of JiaHe Jian Group’s Australian arm, Zone Q Investments, to design and construct the project, which will be located on the corner of Charles Street and Labouchere Road.

The Pinnacle project comprises a 20-storey, luxury apartment tower and a seven-level commercial building alongside.

JAXON group general manager of business development, Mark Kepplinger, said the builder was excited to work with Zone Q and hoped it was the beginning of a lasting relationship.

The project, which will be the first multi-storey project to begin since local zoning laws were changed to encourage higher-density development in South Perth, is expected to be completed by November 2016.

Apartments at Pinnacle will be joint marketed by Colliers International and Dempsey Real Estate, while the commercial space will be brokered through Knight Frank and Ron Farris Real Estate.

Perth’s largest apartment developer, Finbar Group, is also set to press the go button on two significant projects in South Perth in coming months – the $120 million Aurelia apartments at 96 Mill Point Road, which won regulatory approval in December, and a $300 million, 30-storey tower at the Civic Triangle site, directly across the road.

Finbar is planning to build 295 apartments at Civic Triangle, which it bought from the City of South Perth last year for $27.3 million in a deal brokered by JLL.

Elsewhere in Perth, Zone Q Investments is understood to be close to launching a development plan for a site on the corner of Aberdeen and Beaufort streets in Northbridge, which it purchased in the latter half of last year.

Nearby, Stirling Capital has made significant progress on two new apartment projects located on Stirling Street.

At 78 Stirling Street, the Subiaco-based developer launched the sales process for a 136-apartment project, Verdant Apartments, in early December.

Blackburne Property Group is handling the marketing for the Verdant project.

At 108 Stirling Street, Stirling Capital is planning to develop 168 apartments with an end value of $100 million, in a 21-storey building designed by McDonald Jones Architects.

Sales will be launched midway through the year, with the building scheduled to be complete by 2018.

The developer set up an investment syndicate in 2012 to purchase the site in for $7.55 million.

Stirling Capital director Luke Reinecke said returns for investors had come in at nearly double the forecast rate of 9.3 per cent per annum, with an internal rate of return of nearly 17 per cent over three years.

“The Stirling Precinct has been undergoing a massive transformation in the past couple of years and this has had a positive impact on capital growth in the area, outstripping many suburbs of Perth and regional Western Australia,” Mr Reinecke said.

“Recent changes in zoning are driving development and transforming the area into a highly-desirable place to live and work.”