The Wheatbelt region faces significant growth challenges, but it’s home to a surprising mix of old and new businesses. Click through to see more on our business in the Wheatbelt feature. 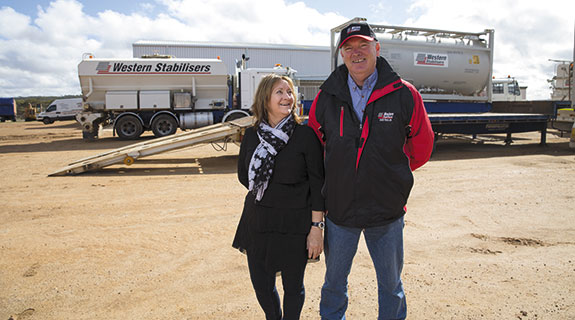 STABLE BUSINESS: Phillip and Jill Robins shifted Western Stabilisers from Perth to Corrigin, where they base their fleet of specialist road construction vehicles (see below). Photos: Attila Csaszar

The Wheatbelt region faces significant growth challenges, but it’s home to a surprising mix of old and new businesses.

Bruce Rock Engineering is the kind of business that defies expectations. Based in the small Wheatbelt town that gives the business its name, it specialises in the design and manufacture of road transport equipment, particularly trailers and tippers.

Established in 1980 by Mike and Gay Verhoogt, who started with one small workshop, it is now run by their three sons, who employ 60 staff.

They have added a steel fabrication workshop in Bibra Lake and a service and maintenance facility in Port Hedland to their core manufacturing and assembly operation in Bruce Rock.

The latest addition to their sprawling operation is a blast and paint facility, which turned out 150 vehicles last year.

“We fly under the radar here and that can be a good thing and a bad thing,” managing director Damion Verhoogt told Business News.

Another business that has expanded away from the limelight is Western Stabilisers, which can be found down a side road on the outskirts of Corrigin, about 60 kilometres from Bruce Rock.

Phillip Robins moved from Perth to the Wheatbelt after buying the business in 2007. He had previously worked overseas and, on his return to Western Australia, evaluated the best location for the business, which is a specialist soil stabilisation and pavement-recycling contractor that works with road construction contractors.

“I looked ahead at six years’ worth of work and put it on a map – Corrigin was right in the middle,” Mr Robins said.

“I didn’t have any connection to the area, so it was quite daunting moving out of Perth, but there’s plenty to do out here.”

Western Stabilisers is one of four businesses – along with Narembeen furniture maker Arcadian Concepts, Eastern Wheatbelt Physiotherapy, and Camp Kulin –featured in a new DVD produced by the Wheatbelt Business Network.

The WBN is a not-for-profit member association that represents businesses from across 43 shires.

Executive officer Caroline Robinson, who led Business News on a tour of the region, is a passionate advocate for the Wheatbelt.

She said the four businesses featured on the DVD, which all moved to the Wheatbelt to establish or expand their operations, illustrate what can be achieved.

“There are lots of opportunities out here and really, you can do whatever you want,” Ms Robinson said. COME ON: Caroline Robinson is encouraging businesses to move to the Wheatbelt.

“If I’d set up my (consulting) business in Perth, I wouldn’t have had the same opportunities.

“Because of the small population, you need to do lots of things and you develop a whole set of skills you wouldn’t get in the city.”

However, Ms Robinson is under no illusions about the challenges as well. Her farmhouse east of Hyden has no mobile phone reception and poor internet capacity, with download speeds few Perth residents would tolerate.

The region has also experienced a long-term decline in population.

It is currently home to about 75,000 people but is battling a significant outflow of those in their late teens and twenties.

One of the difficulties facing people who move to the region is the lack of quality housing stock.

Andrew Meade spent about 20 years working around the Wheatbelt before settling in Hyden.

With the assistance of local association Hyden Business Development, he bought The Ag Shop, which sells a broad range of farming and industrial equipment.

“This would have closed if we hadn’t bought it,” Mr Meade said.

He said trading had been better than expected since he bought the business three years ago.

He has extended the product range to meet demand, saying it was a constant effort to keep up with what customers wanted.

The shop’s success has had a flow-on effect, as Mr Meade has children at the local school, and his staff members have brought extended family to the town.

Mr Meade said the cost of buying houses and land was low in the Wheatbelt, but that was partly offset by high running costs.

Electricity and water charges were higher than in the city, as were grocery prices.

And solutions to the shortage of quality housing weren’t as simple as building new homes.

Mr Meade said banks demanded a 30 per cent deposit before providing housing construction loans in regional areas, plus there was little incentive to build new houses as there was little prospect of capital growth.

Mr Meade said he was forced to buy a house because new staff could not find a house to rent. BUSY: Andrew Meade has bought The Ag Shop in Hyden.

“The biggest limit is the availability of staff, and the housing issues around that,” Mr Verhoogt said.

The company has bought several houses so that it’s easier to attract workers with families.

It also has a single men’s camp, as there is very little rental stock available. During the mining construction boom, Mr Verhoogt hired a handful of Filipino workers on 457 visas to cope with the tight labour supply.

They have become permanent residents and about half have brought their families to Australia.

Most of the company’s staff live nearby.

Mr Verhoogt said he made a conscious effort to maintain quality.

“We turned down some work during the boom and that has held us in good stead,” he said.

“We haven’t ever sacrificed the quality of our builds.”

Over the past year, Mr Verhoogt has seen a significant increase in staff availability, particularly for boilermakers.

“During the boom we might get 15 applications and we’d interview one. We recently advertised and got 180 applications,” he said.

“Getting good staff was very difficult two or three years ago,” he said.

By contrast, a recent job ad attracted 166 responses, at which point he pulled the ad.

“We’ve got people knocking on our doors almost every day,” Mr Robins said

However, he has little interest in workers coming off the mines, as he has found they don’t have the self-reliance and broad skills of country people.

There has also been a big increase in the number of competitors in the WA market, with new players coming from the mining sector and the eastern states.

Mr Robins believes most will not survive in what is a capital-intensive business, with each set of machines – soil stabiliser, spreader, water trucks and prime movers – costing in the vicinity of $2 million.

While the Wheatbelt is a key market for Western Stabilisers, Mr Robins said he had been able to secure work across the state, and was exploring overseas opportunities that drew on his past experience.

The shire has sold most of its older lots to established businesses, and is now looking at new opportunities.

“It’s hard for small businesses to get capital for that kind of development,” Mr Mollenoyux said.

The shire is also working with LandCorp on a new residential sub-division, with plans to release 10 lots in what will eventually be a 25-lot sub-division.

He noted that access to electricity and water networks was limiting new development, and costs of connection were prohibitive for most businesses.

The town is investigating cost-effective solutions to enhance the electricity network and reduce the frequency of brownouts, including the possibility of off-grid power.

It is also looking at ways to improve water pressure and water availability, particularly for fire fighting equipment in the industrial area.

LandCorp is working with the Wheatbelt Development Commission and about 40 towns across the region to help develop residential, light industrial and commercial lots.

Chief executive Frank Marra said it could be a catch-22 situation for regional towns.

“Land development is not a ‘snap your fingers’ process,” Mr Marra said.

“There are considerations such as native title, availability of services, and so on.

“But working collaboratively with the shires has proven to be extremely effective to deliver development-ready land to market.”

This project will deliver 85 mobile phone towers across regional WA over the next four years, starting with 22 priority sites.

It follows an earlier $40 million project in which the state government and Telstra delivered 113 new and upgraded telecommunications towers that provided continuous mobile coverage along major highways and at 15 regional communities.

The Wheatbelt Development Commission this month released an investment blueprint that includes some ambitious aspirations for the future.

It includes a target of more than doubling the region’s population to 180,000 by 2050 built on average annual growth of 7 per cent.

To get there, it acknowledges the need for further investment in infrastructure, with a target of having off-grid power and water in 30 Wheatbelt communities.