Building leadership from within

When BHP Billiton was in the process of establishing its coal and base metals offshoot, South32, a key factor for many who decided to join the new business was their desire to work with its chief executive, Graham Kerr. 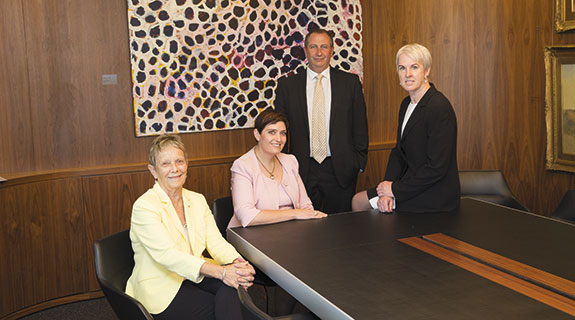 When BHP Billiton was in the process of establishing its coal and base metals offshoot, South32, a key factor for many who decided to join the new business was their desire to work with its chief executive, Graham Kerr.

And they are something to emulate for Ms Du Preez, a graduate of the high-powered Chief Executive Women Leaders Program which Business News can reveal is opening a Perth course for the first time next year offering major Western Australian organisations to nominate up to six female staff whose skills they wanted to further develop.

“It was fascinating to see ... how many people, if you ask them why they went to South32, it was because they wanted to work for Graham,” said Ms Du Preez, who previously worked as BHP Billiton vice-president of analysis and improvement.

“It was eye opening to see how one person, because he’s a good leader, because he’s honest and humble and real, that’s why they would leave a very large, safe job to work for probably what was seen as a riskier option.”

Ms Du Preez said she was fortunate to have been supported by BHP while she was working in Melbourne in efforts to strive for similar leadership skills by taking part in the CEW program which has previously only been conducted on the east coast.

CEW Leaders Program director Dagmar Schmidmaier said the program aimed to change the culture of organisations from within by encouraging and enabling female leadership.

CEW council president Diane Smith-Gander told Business News the program, which has worked with 800 participants since its establishment in 2005, was much needed in Perth.

“I always say that, yes, Perth is a boys’ club, but if you bang on the door hard enough some bloke will open the door,” she said.

“It is about engaging companies to say, ‘hey let’s get the guys to just open the door’.”

Barry Bloch, who was involved in the CEW program during his previous role as WorleyParsons group managing director of people, said he had seen major transformation happen to some participants of the eight-month program.

“I would say for the very vast majority of the WorleyParsons participants it made a fundamental change to their potential and their performance and it impacted the mindset of men around them,” said Mr Bloch, who will continue to mentor participants in his new role as BGC Contracting executive general manager of project support services.

“It’s the cleverness of the design.”

Ms Smith-Gander said the program had been instrumental in participants gaining promotions and in-house international posts.

She said while some women subsequently left to join other companies, the program was set up to assist companies send a message they were genuinely interested in supporting the development of their female staff.

“The cohort-based nature of this, where you send half a dozen people from the same organisation, makes them start to believe that the pathway for a woman leader is being built within the organisation,” she said.

“We’re confident that the companies are picking the right women and that the program is accelerating.”