As residential construction comes off a massive peak, there is an opportunity for a subtle policy response. 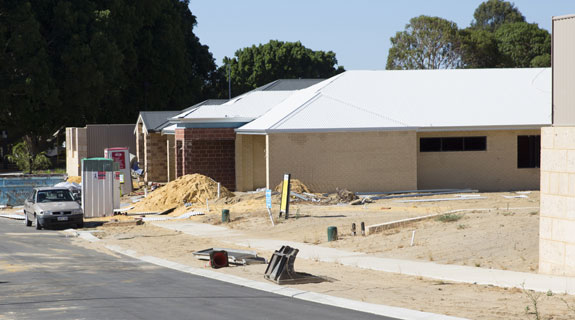 Housing is an important industry; it employs a big number of trades and demands a broad spectrum of materials, many locally sourced.

As residential construction comes off a massive peak, there is an opportunity for a subtle policy response.

Western Australia will lose a key driver of economic growth as the residential construction market slows from record highs, just at a time when the state could do with something to soak up the excess labour resulting from the mining boom collapse.

Housing is an important industry; it employs a big number of trades and demands a broad spectrum of materials, many locally sourced.

And it pumps money into new areas, breathing life into the fringes of the state’s cities and towns as they expand.

It also puts roofs over people’s heads, which makes it more emotive than most industries.

In addition, its importance has a political tone because it affects so many people.

When housing construction slows, these factors tend to create an environment that prompts governments to consider interference. Such involvement ought to be in the long-term interst of the sector.

For instance, reducing the regulatory burden on new land development – by way of more streamlined environmental requirements and less onus on land owners to prematurely bear the cost of connecting new subdivisions to vital services – could help lower the cost of new homes without necessarily committing the state to industry welfare.

To be fair, though, part of the slowdown in demand has been artificially induced by the government.

In this case, concerns raised by an independent federal body (the Reserve Bank of Australia) has led the Australian Prudential Regulation Authority to push banks to limit lending to investors in housing construction. At the same time, the federal government has enforced foreign investment rules around purchases of existing residential homes, further impacting on demand.

While many of those policies are directed at the overheated Sydney market, there are flow-on effects in WA.

The challenge here is to deal with the local conditions without creating a rod for our own backs in the future.

Several big builders dominate the scene, with market share that puts them at the top of the pile nationally, even though the state represents just 10 per cent of overall business.

This market size gives them a corporate feel that is unusual in this type of market. The top eight players represent more than 50 per cent of WA’s housing construction. That makes a handful of large-scale businesses very influential.

Often tough markets pit the big and the small against each other when it comes to survival. Sometimes they can be at odds with each other in terms of what they believe ought to be the responsibility of governments at such a time.

As the squeeze comes on the market, expect more in the building game to voice their opinion on how government should act; this is yet another dangerous policy area for politicians.

One significant area where policy failure is writ large is in building indemnity insurance.

This is an area where the WA government is caught between a rock and hard place. Underwriting this scheme is proving costly and risky. Letting it go may have political consequences.

For nearly 20 years, the state has played a role in giving private homebuilders peace of mind when it comes to the quality of their construction and sustainability of the builder.

As emotional as this subject may be, the fact is the whole industry is carrying the can for this one-size-fits-all approach to what ordinarily would be an individual consumer risk.

Builders who should not be in business are given a free ride, while competent small and mid-tier players are having their ability to grow stifled.

This is distorting the market and hurting the industry. It’s one form of regulation the state could step away from.