Building Commission head Peter Gow has called for more checks and balances in Western Australia’s housing construction sector to ensure there is no repeat of the collapse of Capital Works Constructions. 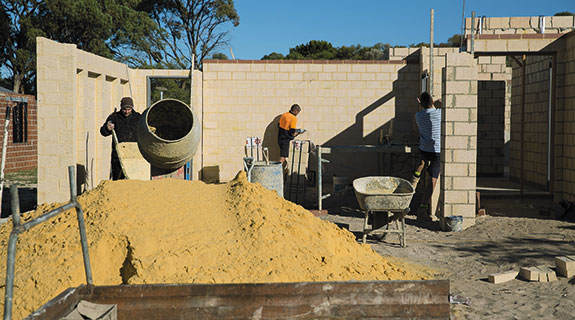 KNOCK-ON: The collapse of Capital Works Constructions has the potential to cause fallout for reputable builders. Photo: Attila Csaszar

Building Commission head Peter Gow has called for more checks and balances in Western Australia’s housing construction sector to ensure there is no repeat of the collapse of Capital Works Constructions.

Mr Gow told Business News that Capital Works Constructions, which traded under the banners Freelife Homes and Visionaire Homes prior to it going bust last month, had clearly taken on more work than it had the capacity to fulfil.

According to the Housing Industry Association’s Housing 100 survey, in 2013-14, Capital Works Constructions was the state’s 17th most prolific builder, with 171 starts.

Its activity in the past financial year grew to 229 homes under construction and a further 84 in the future pipeline.

“What we’ve got to be more aware of and vigilant of is rapid growth of companies where there is no underlying improvement in their financial position or capacity,” Mr Gow said.

“We’ve had a boom in the housing industry and to a fair extent it’s the big builders that have tended to pick up the slack there rather than the little guys; but it’s certainly had an impact on the smaller guys in terms of the availability of trades, prices they’ve had to pay for trades, etcetera.

“These circumstances put a lot of pressure on honest builders as well as the few dodgy ones, which are trying to get people in to fund their cash flow."

Mr Gow said the Building Commission would be liaising closely with QBE and Calliden, because the insurers effectively controlled builders’ turnover.

When a builder applies to a home indemnity insurer like QBE, the insurer then has a close look at their books and applies a limit on the amount of work they can do based on that assessment.

“A lot of builders don’t actually operate close to their limit; the practicalities of their jobs and the number of people they have to supervise and the number of customers they’ve got means they can bounce along well under the limit, don’t cause any great grief and the insurers don’t keep them under close scrutiny,” Mr Gow said.

“Because they’ve got the headroom in the turnover limit they were given early on, they can expand their business without necessarily ringing any alarm bells.

“Whereas if you have a builder who is already at their limit, they can’t expand their business without the insurers having a good hard look at them.

“That’s what happened with Capital Works … they ramped up, got into some difficulty, weren’t paying their subcontractors, and the insurers in November said ‘stop, no more premiums until you sort out the mess’.”

Creditors of Capital Works Constructions met with administrators from Deloitte for the second time on June 12, voting for the company to be wound up and its assets liquidated.

However, as previously reported by Business News, unsecured creditors are not likely to be repaid the estimated $8.5 million in outstanding debts.

Messrs Coffey and Ricci are facing fines and exclusion from WA’s housing construction industry if the SAT proceedings against them are successful.

In addtion, Deloitte said earlier this month the builder appeared to have traded while insolvent from at least June 30 last year.

Investigation of that allegation would most likely be led by the Australian Securities and Investments Commission prior to the completion of the winding-up process.