Building approvals at highest level since 1988 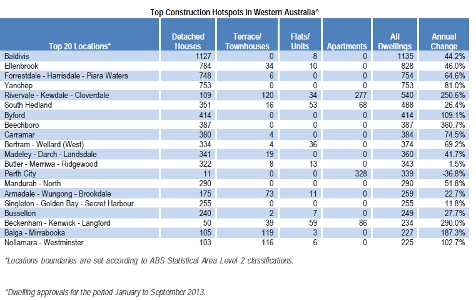 The Australian Bureau of Statistics reported today that there were 7,561 homes approved to be constructed in the three months to September 31, a 6.3 per cent increase on the previous three months.

Home building approvals have not been this high since 1988, the Urban Development Institute of Australia WA CEO Debra Goostrey said.

Data out this morning from Bankwest showed 19,949 people have entered WA’s housing market as first-time buyers in the past year.

Ms Goostrey said, however, price rises experienced during the property boom of 2005 to 2007 had been kept in check, keeping the new dwelling market ticking over.

“Whilst the median vacant land price doubled between 2005 and 2007, price rises have been running at 5-6 per cent per annum over the last 12 months,” Ms Goostrey said.

Building approvals in the Perth metropolitan area are 35 per cent higher than the 10-year average, with Baldivis the most popular place to build with an average of 29 new housing approvals each week over the past nine months.

There were 21.3 approvals per week at Ellenbrook over the same period, 19.4/week in Harrisdale/Piara Waters, and 19.4/week in Yanchep.