Building a bridge from basketball to business

Andrew Vlahov has built a business on basketball, but now he has much bigger things on his mind than shooting hoops. 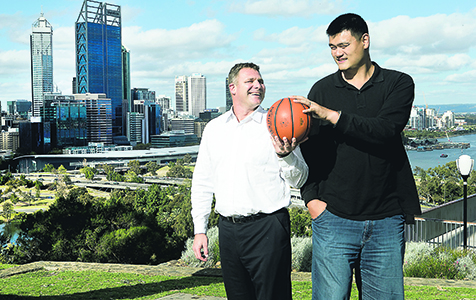 Teaming up: Andrew Vlahov is hoping a successful sporting partnership with Yao Ming can turn into a commercial arrangement. Photo: Travis Hayto

Midway through the past decade, Andrew Vlahov took the Perth Wildcats basketball team on its first Asian foray – a showdown against the Sydney Kings in Singapore.

Mr Vlahov’s aim was to raise the National Basketball League’s profile, with an ultimate goal of setting up a professional basketball competition featuring teams across South-East Asia.

RV Sport’s first event was a basic basketball tournament in 2010, which has  grown into the YouYi Games and is now called the Sino-Australian challenge – a once-yearly series pitting the Australian Boomers against the Chinese Olympic team.

In 2011, the company launched the first Cable Beach International – a club tournament featuring teams from Australia, China and Singapore.

And last year, RV Sport presided over the first annual Friendship Games – a youth event showcasing Australian and Chinese athletes aged 12 to 17 in basketball, track and field and swimming.

Mr Vlahov said the tournaments were not purely about celebrating athletic achievement, however.

“It’s not about sport at all,” he said. “It is about trade. I’ve always believed that, not just for basketball, we need to integrate better.

“The more we can deepen the partnership through sports and culture, the better our overall relationship with China and Asia will be.”

Mr Vlahov said it took RV Sport about three years to build its networks in Shanghai and Beijing, with the group striving to develop a working partnership with Chinese basketball superstar Yao Ming’s marketing and management firm, Starz International Sports.

The involvement of Mr Yao, Mr Vlahov said, has the potential to be a game-changer for RV Sport.

“He is such an amazing brand in China, that’s what people don’t understand here,” he said. “The equivalent in Australia would be the AFL. He’s that prominent; he’s that well thought of.

“Largely we have been fortunate to have that involvement, but it’s because we’ve had the right approach of how you do that with someone like Yao.

“That’s where sport can play a big part and culture can play a valuable role.”

Mr Vlahov said he was aiming to expand on the already successful sporting relationship with Starz into a mutually-beneficial commercial arrangement.

“WA has an unbelievable agricultural opportunity to offer Asia,” he said. “From protein supply, to dairy, to cropping, to sugar and biofuels, there is enormous opportunity.

“If you look at where they sit, they have a food security and food supply shortage, while Australia has an oversupply. They have the financial wherewithal to invest in Australia as well as the consumption market to deal with whatever we can grow and produce.”

Mr Vlahov, who has a background in economics, said it was only logical that supply would meet demand somewhere along the line.

He has proposed an off-take agreement model to be rolled out across the sector, similar to the iron ore revolution in WA more than 25 years ago.

“That doesn’t mean ownership, but we need investment in the agricultural industry to lift the production capacity to create industry and jobs here in Australia,” Mr Vlahov said.

“There are a number of challenges involved, obviously, but I think we have got the right state government leadership to achieve this and I think it can be done.

“I know from my experience in discussions in China that they have a desire to be engaged, but we have to engage properly and there is a process involved that needs to be respected.”