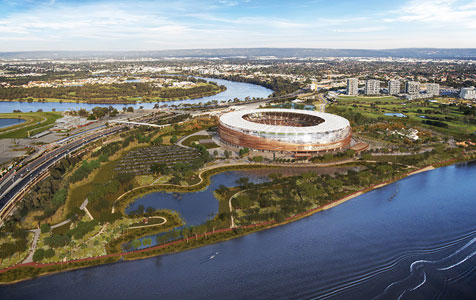 The new station will replace the existing Belmont Park station.

Three major builders have been shortlisted to construct the $100 million train station for the new Perth Stadium on the Burswood Peninsula, part of the state government's $300 million transport plan to service the venue .

Transport Minister Dean Nalder announced today the state government had whittled down the number of potential proponents to three – a joint venture between Brookfield Multiplex and Downer, a consortium of Laing O’Rourke and AECOM, and John Holland.

The state government initially put out the call to interested builders in July.

Mr Nalder said the deal would comprise station construction as well as significant rail works, including a rail depot with the capacity to store up to 117 railcars on the peninsula.

“Because of this, the six-platform Stadium Station will deliver unprecedented levels of service to Perth’s public transport users,” Mr Nalder said.

“Once the stadium and train station are up and running, the era of waiting for hours in your car after a big concert or football match will be a thing of the past.

“Public transport will be the most efficient and effective way to travel to and from this world-class venue.”

The Stadium Station will replace the existing Belmont Park station once it is complete.

Construction of the Hassell-designed stadium is set to begin before the end of the year.

The state government’s transport plan for the stadium also includes bus and pedestrian links, with the total cost of the strategy to come in just under $300 million.

Along with the six-platform Stadium Station, a dedicated stadium bus facility will have the capacity for up to 20 buses at any given time.

The bus hub will be located south of the stadium and be known as the Peninsula Bus Station.

A CBD bus shuttle will also operate from Nelson Avenue in East Perth, to allow spectators access to around 40,000 parking bays in the CBD.

A new pedestrian bridge will also be built between the Burswood Peninsula and East Perth, to divert pedestrians from high-density residential areas.

The state government expects around 8,600 people to cross the existing Windan and Goongoongup bridges, while around 14,300 people are expected to get to the stadium using the new pedestrian bridge.

A state government study released earlier in December 2012 showed that in order to move 50,000 people to the peninsula without using public transport, 20,000 cars would be needed, as well as 50 hectares of ground level parking at a cost of around $150 million, as well as a multi-storey carpark which would need 12.5 hectares of land and cost up to $650 million to build.

The study showed around 28,000 people will likely use the Stadium Station before and after events.