OPINION: The government’s budgetary outlook is in stark contrast to the prevailing trend on the Business News BN30 stock market index. 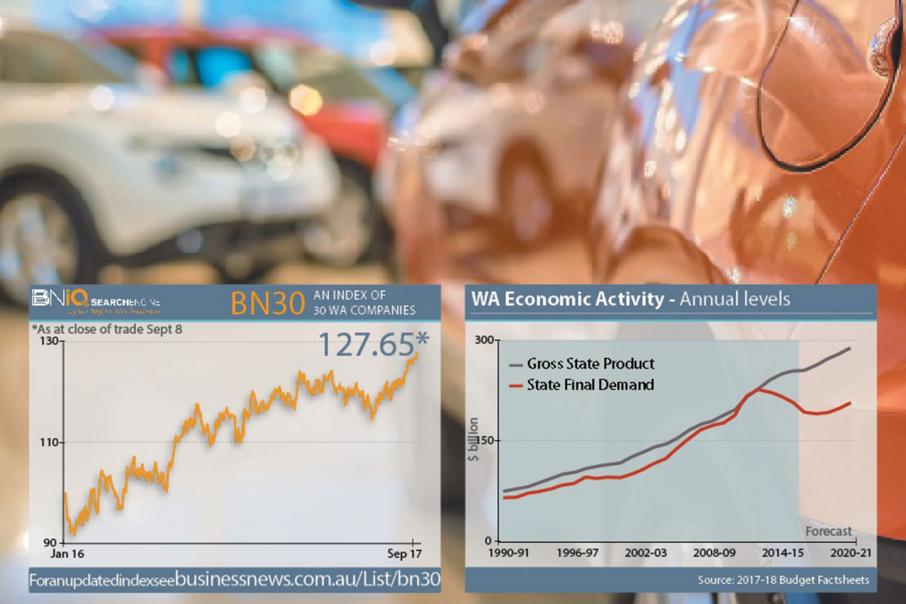 The recent lift in car sales is indicative of BN30 companies’ optimism, which is in stark contrast to the official outlook. Photo: Stockphoto

If the message contained in the state government’s budget is to be believed, Western Australia is the nation’s sick man; but if you look at the signals coming from the private sector, the crisis has passed and business conditions are getting better by the day.

Can both be right?

The short answer is yes. Government can struggle while the private sector expands, though a government tax grab, especially a tax on jobs through an increase in payroll tax, will hurt business.

It appears business has been quicker than government to adapt to the dramatic changes that occurred after commodity prices started to collapse in 2012.

During the past five years, business has been cutting costs and retrenching staff. Government has been slower to react, resulting in what was a manageable problem during the four-year term of the previous government becoming a promise-breaking crisis for the government of Mark McGowan.

Two graphs tell an interesting story of the direction taken by government and that by the private sector.

The government’s budget papers show a sickly level of economic activity as measured by State Final Demand (which includes government spending), while the BN30 graph of major local companies has risen by 27 per cent since it was launched early last year.

Investors, from inside and outside WA, can sense the sea-change that has started in the state’s private sector, which is why they have been buying shares in locally focused stocks – with those higher share prices the key to the BN30 as a measure of the economy.

The value of exports, the lifeblood of a state plugged into the global commodity market, is rising in tune with higher prices for iron ore, alumina, titanium minerals, gold, and even wool.

The international economy, which drives WA business, is in robust health despite political uncertainty in North Asia and the US.

For the first time in decades it seems that the world’s major economies are enjoying synchronised growth, which will ensure continued strong demand for WA’s exports.

In time, the improving business conditions will flow into the state government’s finances. However, that’s when the challenge will flip, from forced cost cutting and tax increases to resisting a boom-time spending splurge of the sort that damned the previous government.

While the BN30 represents a forward-looking composite picture of the private sector, one member of the group stands out as an interesting proxy for the wider economy because of its exposure to transport, a key industry in a long-distance state.

Interestingly, AHG’s share price has risen by 10 per cent since August 25, the day the company reported a 38.4 per cent fall in net profit for the year to June 30.

At first glance, the market’s positive reaction to a falling profit seems odd, but that’s because the two numbers reflect different views – one looking back at a period of tough trading, and another looking forward to better times.

As a proxy for the state government’s budget woes versus the private sector’s brightening outlook, AHG is quite useful.

In fact it’s more than useful, because vehicle sales are emerging as one of the more positive pointers to better times ahead, with a Queensland-based stockbroking firm the first to note the significance.

Morgans used the latest vehicle industry sales data (called VFACTS) to upgrade its investment advice on AHG from ‘hold’ to ‘buy’, tipping the start of a strong profit resurgence this year and a 60 per cent lift in profit.

Car sales in WA are driving AHG, with VFACTS reporting that new vehicle sales in the state rose by 4.2 per cent in August compared with the previous month, while the national average for the same period was up 1.8 per cent.

Because car sales have been depressed for four years (down 22 per cent since 2012), there was always going to be a sharp recovery, aided by AHG’s cost-cutting drive.

“The WA figure is notable, especially in the context of WA only recording three months of positive year-on-year growth over the past four years, with two of those occurring in the last four months,” Morgans said.

WA car sales are still well below their peak, but the rising trend is what interests investors.

In light of that movement, AHG’s rising share price is feeding into the BN30, arguably a better proxy for the WA’s economic outlook than anything published in the government’s budget papers.