The state government will hit the business sector with increased payroll tax bills and make further cuts in public sector spending after confirming that its annual budget will plunge to a $1.29 billion deficit in the current financial year. 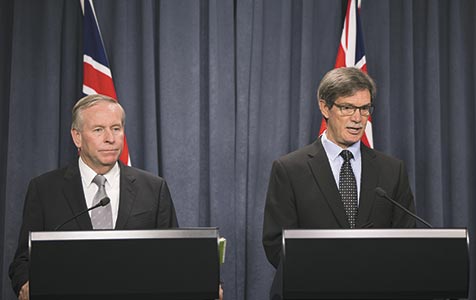 The state government will hit the business sector with increased payroll tax bills and make further cuts in public sector spending after confirming that its annual budget will plunge to a $1.29 billion deficit in the current financial year.

Premier Colin Barnett said the deterioration in the government’s financial position was primarily due to the collapse in iron ore prices and insisted there was nothing the government could have done to avoid it.

“Under no circumstance could this deficit have been avoided,” Mr Barnett said.

“It was completely beyond the control of the state; we had taken into account the decline in GST revenues (but) no one could anticipate a 40 per cent-plus fall in the iron ore price.”

The forecast $1.29 billion deficit compares with the $175 million surplus the government had estimated when it released the 2014-15 budget in May.

The mid-year financial projections released today show the government will post another deficit in 2015-16, of $907 million, before returning to surplus the following year.

The mid-year update also shows that state debt will increase to $30.9 billion by June 2018, about $1.5 billion higher than the budget-time forecast.

The government has responded to the deficit blow-out by making payroll tax changes that are expected to reap an extra $418 million over the next three years.

All business subject to payroll tax will be required to pay the tax on their entire payroll, with effect from July 1, 2015; currently the first $800,000 of payroll is exempt.

This change means that larger businesses, with a payroll of $7.5 million, will pay an extra $44,000 per year.

The payroll tax changes have been announced just days after the government said it would provide royalty concessions to mid-tier iron ore miners facing tough times.

“It’s one of our few sources of taxation revenue, and bear in mind this government has given two rebates on payroll tax to small business , we’ve given a cut in terms of increasing the exemption level, and all we’ve done today really is delay for one year the second stage in that exemption increase," he said.

“It’s is not quite what we committed to but it’s not far off.”

In other moves announced today, the government is looking to cut its wages bill by $1.3 billion over the next four years, by introducing a system that encourages its agencies to replace retiring staff with lower-cost recruits.

A third initiative, designed to save $85 million, involves more efficient use of ICT-related services.

Treasurer Mike Nahan said there had been an unprecedented fall in the government’s revenue estimates since the May budget.

Royalties are now expected to be $7.1 billion lower over the next four years and tax receipts $1.2 billion lower, but these would be partly offset by GST grants being $2.7 billion higher.

The May budget had forecast that GST grants to WA would fall to just 11 cents for every dollar of GST paid in 2017-18; the government now expects GST grants will bottom-out at 28.2 cents in the dollar.

CCI chief economist John Nicolaou urged the government to review all of its programs to weed out unnecessary and inefficient spending instead of lifting tax on business.

“But increasing the payroll tax burden is not the right move to address the issues with the budget.

“Our data shows that confidence is already low and its being driven down by high costs – this tax hike adds further to costs and may lead to businesses further trimming their investment pipelines and scaling back their hiring intentions.”

Mr Nicolaou noted that government spending was expected to rise by 4.2 per cent in the current financial year, significantly higher than the May budget forecast of 2.6 per cent.

“To its credit, the government has agreed to review eight target agencies to identify further savings, and CCI looks forward to seeing the results of this agency review in the 2015-16 budget.”

“In this regard, the government is undertaking detailed expenditure reviews of a number of agencies with a view to firming up further savings in the coming Budget; is continuing to pursue urgent reform of the GST distribution system; and is progressing with its program of announced asset and land sales.”

"We have an asset sale program underway, we've announced that we're going to undertake a second wave of those, we haven't announced those yet, they will be targeted at debt reduction."