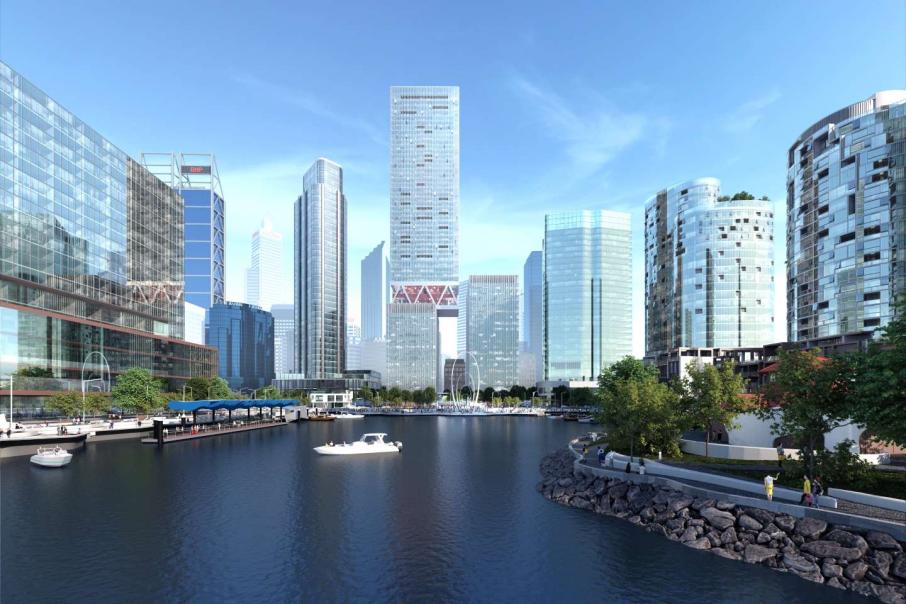 The state government gave the green light today to the project, which proposes the development of two towers; one of 21-storeys and the other at 58-storeys, which will become one of the tallest buildings in the CBD.

Brookfield said the project had a gross development value of $1.1 billion and an estimated construction cost of $367 million.

Designed by New York-based Rex Architecture in consultation with Hassell, the proposed towers will collectively comprise more than 52,000 square metres of office space; 1,817sqm of retail and dining space; an 84-room hotel; and 237 apartments.

Previously dubbed 'Perth Plus', the project will also feature approximately 2,500sqm of public open space at ground level, including a galleria and a southern plaza.

Brookfield unveiled its initial plans for the Elizabeth Quay sites in 2017, with concepts for the development, which it has named Plus, since redesigned following community consultation and City of Perth officer recommendations.

Brookfield Properties executive vice president and co-head Carl Schibrowski said the design delivered on the state government’s vision for the precinct as a world-class destination to visit, live and work with high-quality urban amenities and open space.

“Lots 5 and 6 Elizabeth Quay is a transformational project for Perth that will connect the Perth CBD with the Swan riverfront and we welcome Development WA’s decision to grant approval for the project to proceed to the next stage,” he said.

“Brookfield is Perth’s largest office owner and remains committed to the long-term future of this vibrant global city.

“Elizabeth Quay is a critical new mixed-use addition to the CBD, and Brookfield Properties is delighted to be the developer for the best parcels within this precinct.”

The project is expected to employ 2,500 people during the construction phase and adds to Brookfield’s adjoining $360 million Chevron tower and the $300 million EQ West tower, developed by AAIG, which is backed by Malaysian developer Victor Goh.

Both of those projects are under construction.

“We look forward to sharing our vision and project milestones with the broader Perth community and continuing to invest in shaping the future of the Perth CBD,” Mr Schibrowski said.

“These new towers will become another iconic view along our Swan River and encourage more people into the Perth CBD, providing a boost to the economy and supporting and creating local jobs,” she said.

“This complements our recently announced Perth City Deal which will see $1.5 billion of investment into the Perth CBD, unlocking thousands of jobs and economic benefits.”

Premier Mark McGowan said the proposed development was another sign that confidence was returning to Western Austrlaia.

“As we continue on the path to recovery, my government will continue to support projects that boost the State’s economy while generating life and vitality in the city.”

To read more about office developments taking shape in and around Perth’s CBD, check out Business News annual commercial property report in our next magazine edition, out November 2.