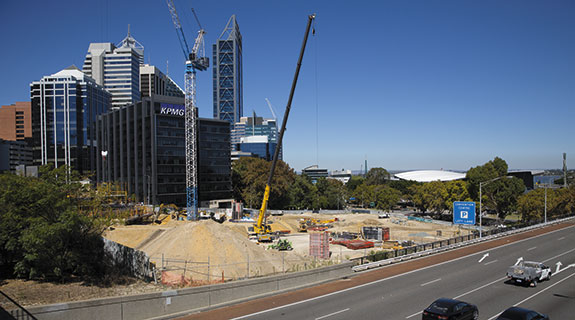 PROGRESS: After months of forward works, buildings are starting to come out of the ground at the Old Emu Brewery. Photo: Attila Csaszar

Probuild recently completed a forward works package, including concrete piling works and retaining walls at the Capital Square site, being developed by Victor Goh’s AAIG, worth around $12 million, according to City of Perth documents.

Brookfield’s scope of works includes construction only up to level two of the office tower component of Capital Square, one of three buildings proposed at the site.

Brookfield Multiplex is in exclusive negotiations to build the rest of the 28-level, 48,484-square metre office tower, with the balance of works to be done under an early contractor involvement agreement.

The entire Capital Square project comprises a further two towers, one a 34-level hotel and a 40-storey apartment tower, as well as a four-storey podium building which includes a 400-seat auditorium for Woodside, and the hotel’s gymnasium and pool facilities.

Slight modifications to the podium building, understood to be a Woodside request, are to be assessed by the City of Perth metropolitan development assessment panel today.

Changes include a rooftop terrace for Woodside workers, including a shaded barbecue area and a swimming pool deck, as well as expanded end-of-trip facilities, including bicycle storage.

The podium building is also proposed to include a public plaza, offices, two-levels of retail and entertainment facilities and 659 parking bays.

Construction of Woodside’s headquarters is expected to be completed by late 2018, with the oil and gas giant’s lease at Dexus Property Group’s Woodside Plaza due to expire at the end of that year.

Dexus is formulating plans to refurbish the building and upgrade the retail plaza at ground level to ensure it is enticing for new tenants post-Woodside. An artist's impression of the Capital Square project, with Woodside's headquarters on the left, the hotel in the middle and the apartment tower filling out the block.