A decision on the future of the state’s Tier 3 lines could be made as early as June, with grain handling cooperative CBH Group and network operator Brookfield Rail currently in arbitration through the Economic Regulation Authority. 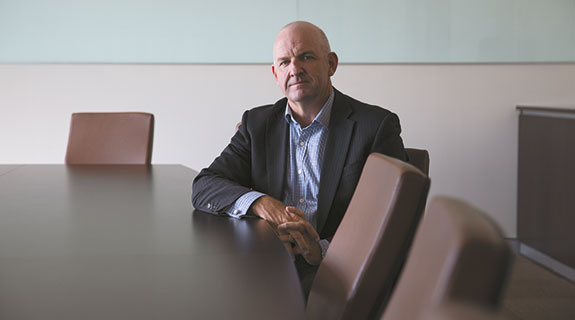 GETTING MOVING: Paul Larsen is hoping to encourage grain freight on the network. Photo: Attila Csaszar

A decision on the future of the state’s Tier 3 lines could be made as early as June, with grain handling cooperative CBH Group and network operator Brookfield Rail currently in arbitration through the Economic Regulation Authority.

Brookfield has announced it will offer CBH access to the lines under a new pricing regime that better reflects the costs of repairing and maintaining that part of the network.

The lines were closed last year because they were deemed uneconomic due to the substantial maintenance required, leading to increased usage of road transport for freight haulage.

Brookfield Rail chief executive Paul Larsen said the proposed deal, which would last for 10 years, would ensure the lines remained sustainable for the future without government investment.

“The government has written to us following the parliamentary inquiry to inform us that there won’t be any further investment into the rail network by the government,” he said.

Consequently, the price for usage will be higher than what CBH pays today.

“That’s required because we’ve done an extensive analysis of what’s needed to keep that network running at the right levels,” Mr Larsen said. “We think it’s reasonable, it’s well within the bookends that the ERA determined as being the floor and ceiling.”

Mr Larsen said Brookfield wanted to collaborate with CBH to increase freight through the network.

“For every extra tonne they run on the rail system, the cost per tonne will come down,” he said.

“We are moving record tonnes with CBH on the rest of the grain rail network, and we’ve got the capacity to do more.

“That’s what we’d love to do; work with CBH to get more grain on rail.

Mr Larsen said such an outcome would benefit the government by taking freight off the roads, and farmers via the security and certainty it would provide their supply chain.

“I remain confident (we can find an acceptable outcome) within the 90-day period,” he said.

CBH Group general manager of operations, David Capper, said the co-op looked forward to negotiating a sustainable long-term agreement with Brookfield, but was yet to receive the details of the proposal.

“We started the ERA process with a clear objective – to achieve fair performance for a fair price,” he said.

“CBH is pleased that the negotiation process is now under way.”

As the ERA process proceeds (and despite the government having withdrawn financial backing), it remains to be seen whether the Nationals will decide to dip into the Royalties for Regions kitty to help with line maintenance costs.

That was an option Regional Development Minister Terry Redman didn’t rule out when contacted by Business News earlier this year.

“I’m willing to consider providing Royalties for Regions funding to support Tier 3 lines, but any possible funding is dependent on a robust business case being provided to the state government from relevant parties,” Mr Redman said.

That would be in addition to almost $150 million in government funding for the grain freight network in the past three years, on the back of the Strategic Grain Network Review of 2009.

About half of the rail network is used exclusively for grain movements, which account for about 9 per cent of the total tonnage moved on the system. Only 4 per cent of the grain freight load was carried on the Tier 3 portion of the network, or between 300,000 and to 400,000 tonnes annually.

Brookfield has invested more than $2 billion in the network since privatisation in 2000, while tonnage has more than doubled, from 30 million tonnes per annum to 70mtpa.

Mr Larsen said the company hoped to make a contribution to the state’s economic growth as an enabler, through investment and careful management of efficiency in the supply chain.

He said Brookfield also had an important role keeping the state connected with the east coast.

Further engagement could come by moving down the supply chain into ports. Brookfield already operates the Dalrymple Bay coal terminal in Queensland, with output of almost 80mtpa.

“Brookfield is a large owner of ports around the globe, including in Australia,” Mr Larsen said.

“We understand ports, we see ports as an asset class we’ve got value to add to in this state.”

Brookfield was unsuccessful in its bid to run the proposed multi-user iron ore facility in Esperance, which was awarded to Yilgarn Esperance Solutions, led by Asciano, in May 2014, but more opportunities will arise.