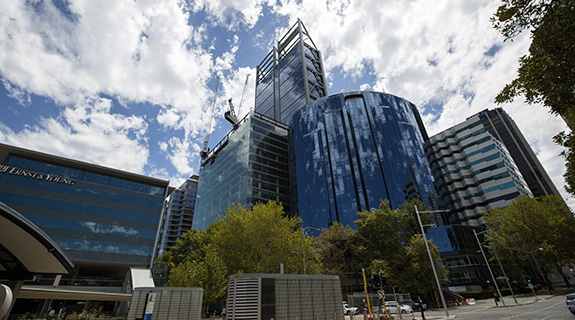 Law firm Ashurst will vacate its Exchange Plaza home once Brookfield Place Tower 2 is completed, signing 12-year deal to take up floors 11 and 12 of the new 16-storey office tower.

Brookfield Property Partners announced the agreement today, with Ashurst to take up 3,600 square metres of space across the two floors.

The building is currently under construction by Brookfield Multiplex, which will also move into the tower, and is on track to be completed by around the start of December this year, after having topped out early in December last year.

The Ashurst deal takes the pre-committed space in Brookfield Place Tower 2 to about 50 per cent of the building.

Ashurst will vacate level 32 of Exchange Plaza to facilitate the move, becoming another high-profile tenant to exit the building, after the Australian Securities Exchange moved its offices to Central Park last year.

A 50 per cent stake in Exchange Plaza, owned by Colonial First State Asset Management's Private Property Syndicate, was listed for sale by agents CBRE and JLL last year, following a failed campaign in 2013, but a suitable deal was unable to be found.