Perth-raised Naomi Brockwell has carved out a most unusual career in the US, combining her twin passions for the arts and free-market economics. 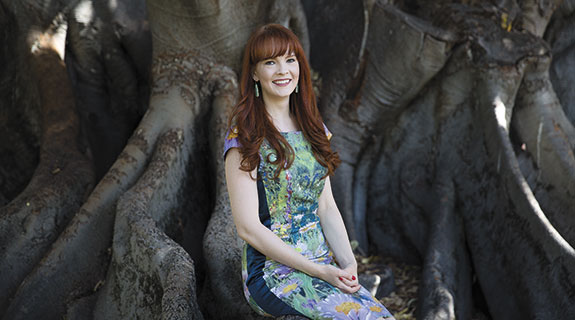 PASSION: Naomi Brockwell has packed a lot in to her 29 years. Photo: Attila Csaszar

Perth-raised Naomi Brockwell has carved out a most unusual career in the US, combining her twin passions for the arts and free-market economics.

Ten years ago, Naomi Brockwell was in a similar position to many other 19 year olds.

She’d spent two years at university, was not enthused by her economics studies, and decided to take a year off backpacking in Europe.

For Ms Brockwell, however, there was a deeper unease about the Keynesian economics she was being taught.

“I didn’t believe in the economics I was taught, I thought it was just false.”

After returning to Perth, the energetic Ms Brockwell pursued her interest in the arts, studying acting at Curtin University and classical music at the Western Australian Academy of Performing Arts.

“It changed my life, the quality of teaching there is fantastic, and I fell madly in love with opera,” Ms Brockwell told Business News

She went to New York to pursue opera singing, expecting to stay for a few months, but is still based there, making her debut with the New York Lyric Opera in 2013.

She has also pursued her lifelong interest in film making, setting up a production company in New York and, among many other things, working as an executive producer, casting director and actress on the 2014 thriller Subconscious.

As if that’s not enough, Ms Brockwell has also become a self-confessed economics evangelist in the Austrian tradition, after the economics editor of Barrons magazine, Gene Epstein, became her mentor.

“He gave me a huge reading list with (Ludwig) von Mises, (Friedrich) Hayek and (Murray) Rothbard and all those good ones,” she said.

Ms Brockwell said the economic ideas she has discovered in New York helped to explain what she believed instinctively at university all those years ago.

“(Milton) Friedman says you should never judge a policy by its intentions, judge it by its consequences,” she said.

“So much policy is driven by great intentions that never actually work out because there are so many unintended consequences, as Hayek wrote.”

Ms Brockwell is now involved in a wide network of organisations with like-minded people in the US, including Liberty.me, which she said was like Facebook for people passionate about freedom.

“I also run an Austrian economics reading group with Gene; it’s mainly for young people to get them excited.”

A crucial break was discovering The Moving Picture Institute, which supports people who make films that promote freedom.

“I was blown away. I’m passionate about individual rights and freedom, and I’m a film producer, so that’s a perfect melange of my two great passions.”

Among many other projects, Ms Brockwell has made a series of videos promoting the crypto currency Bitcoin.

“Somewhere along the way I discovered Bitcoin and fell in love with it,” she said.

“I love the idea of money outside of government.

“It’s a form of currency that can’t be controlled by any central authority.”

Ms Brockwell believes Bitcoin is particularly important in countries like Russia, China and Argentina, which have unstable currencies or restrictions on overseas money transfers

“Bitcoin revolutionises that because it’s digital and it can be accessed anywhere on the internet,” she said.

With her trademark enthusiasm, she sees almost unlimited scope for Bitcoin.

“We shouldn’t think of it as money but as a technology with enormous potential.”

While holidaying in Perth over the past month, Ms Brockwell has kept up her usual busy schedule, working on film productions and speaking at a Freedom and Prosperity Club function.

She has also kept up her links with Ron Manners’ Mannkal Economic Education Foundation, for which she is an advisory councillor.

Asked how she packs so much into her life, Ms Brockwell, says: “I take opportunities, and I’m not afraid to cut my losses”.

“I’ll do that and move on, and that frees me up to pursue new things.”