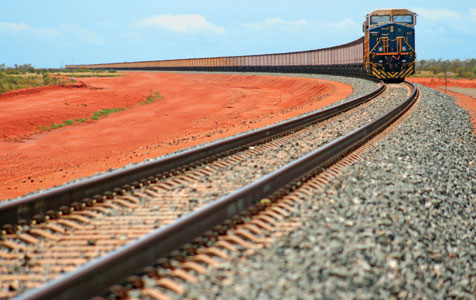 Brockman Mining says the price it should pay for access to Fortescue Metals Group’s Pilbara railway should be no more than 88 cents per tonne, a fraction of previous estimates by FMG.

In a submission to the Economic Regulation Authority, the aspiring iron ore miner also criticised the lack of transparency by FMG and questioned the credibility of Fortescue’s growth plans.

Brockman has used a state government access code to apply for access to FMG’s railway, which is formally owned by subsidiary company The Pilbara Infrastructure (TPI).

Its application triggered a review process by the ERA to determine appropriate floor and ceiling access prices, within which Brockman and TPI are meant to negotiate a final price.

Assuming FMG ships 120 million tonnes (mt) per year and Brockman ships 20mt, it said the ceiling cost should be 88 cents per tonne.

Based on annual shipments of 20mt (which is the volume Brockman wants to move), Flinders’ submission said the ceiling equated to $28.78 per tonne.

Brockman came up with a figure of $4.79/t, because it assumed a volume of 120mt for this purpose.

This figure is still more than five times higher than Brockman’s own estimate.

Brockman argued that 120mt was an appropriate assumption, even though Fortescue has announced plans to lift output to 155mt.

Brockman said this was an “aspirational target” for an “unknown point in time” and conflicted with Fortescue’s port capacity constraint of 120mt.

It added that TPI has not provided the underlying costs for the upgrade in its rail capacity to 155mt, and therefore it could not make pricing estimates for this volume.

Flinders provided separate estimates, based on a draft costing model TPI released in 2010 when FMG’s annual output was 40mt.

Flinders extrapolated those numbers based on output of 155mt, and came up with a ceiling price of $1.49/t.

It refined that estimate to include recommended revisions by PwC, and came up with a figure of $2.10/t.