ALMOST six years in the making, BGC's $110 million Brikmakers plant in Hazelmere has begun production, although not in the most ideal of circumstances. 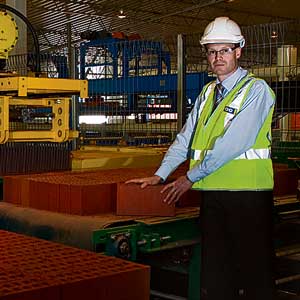 ALMOST six years in the making, BGC's $110 million Brikmakers plant in Hazelmere has begun production, although not in the most ideal of circumstances.

But the softening housing market isn't dampening the spirits of BGC director Sam Buckeridge, who says the new business is well prepared for the cyclical nature of the industry.

"It would have been nice to have the housing industry more buoyant, but it's a long-term investment. There'll be years when demand is lean and years where it's running hot," Mr Buckeridge told WA Business News.

"Our financial modelling certainly allowed for some fairly pessimistic scenarios."

At peak capacity, the Brikmakers plant will produce 110 million bricks a year, less than half of which will be used to meet demand by the BGC group, with the remainder sold to other builders.

The plant will operate 24 hours a day and will be serviced by about 60 production staff, with an additional 30-40 administration and sales staff.

Once fully operational in about six months' time, Brikmakers will become the state's third largest brick manufacturer, after Boral-owned Midland Brick and Brickworks, which owns the Austral, Bristile and Auswest Timbers brands.

An importer of bricks just two years ago, WA now meets its demand domestically, with demand from the state's construction industry averaging between 500 million and 600 million bricks a year.

Mr Buckeridge is predicting a more dynamic market, with greater competition in pricing and the types of products offered.

Speculation of a price war erupting between brick manufacturers could be premature, however, with increased transport, gas and electricity costs continuing to influence prices.

"[Prices] will be dependent on reaction of existing brick manufacturers to our entry into the market," Mr Buckeridge said.

Competitor Brickworks has six plants in WA with a combined production capacity of about 250 million bricks.

Mr Partridge said the output from the new plant should be readily absorbed into the market.

"It's good for the building industry in WA. We had to bring in 50 million bricks [in 2007] because demand exceeded local supply," Mr Partridge told WA Business News.

"The fact that it's a growth market ... some additional capacity is a good move."

Brickworks has spent the past couple of years trying to gain approvals for its proposed new brick plant in Waterloo, echoing the experience of BGC and its lengthy effort to bring its plant on line.

BGC enters the market at a time of immense competition in the housing construction industry, as builders rush to offer incentives and discounts to entice buyers and help revive the already low-margin industry.

Together with softening labour costs, buyers should also feel the flow-on affect of lower commodity prices.

Steel has dropped almost 10 per cent since October, while the drop in aluminium prices, in US dollar terms, has almost completely evaporated due to the changing exchange rate.

The building industry is bracing for further weakening in 2009, with the Master Builders Association of WA forecasting total dwelling starts to fall to around 18,000 in 2009, from about 20,000 in 2008.