Some of the state’s property leaders share their predictions for the year ahead. 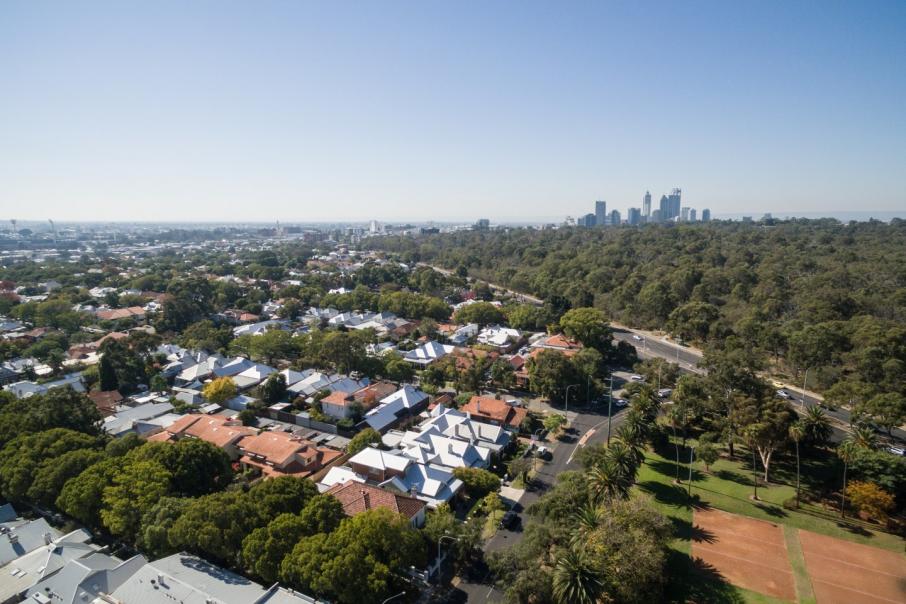 The property industry anticipates the state’s residential market will deliver the most growth of any sector this year. Photo: Gabriel Oliveira

The residential market has been tipped to lead growth in Western Australia’s property market this year.

Almost half of attendees at the Property Council of Australia WA Division recent outlook lunch voted residential as the most likely top-performing sector for 2021 via an online survey conducted at the event.

However, with border closures and international travel restrictions still a consideration, population growth (a key driver of property activity) was top of mind for many in the room.

Keynote speaker Amanda Davies, head of the School of Social Sciences at the University of Western Australia, outlined how the future wasn’t as bleak many believed.

“We are in a pandemic and that is going to have an impact,” Professor Davies told the forum.

“But it’s about what type of impact that has … and how we respond to it so we can get back on track.

“All in all, despite everything that’s happened with the global pandemic, the population projections remain relatively stable over the longer term for WA.”

“Net out migration from 2014 to 2018, we were in a losing period, we lost more people during this time,” she said. “In the first part of 2020, you can see we actually moved into positive territory.”

International students were a key driver of property activity, she said, advocating for the government to consider visa incentives to entice overseas university applicants back.

“There were a lot of people every month moving to the state and that’s what drives booms, which puts real pressure on the property market.”

That pressure is already emerging in the residential market, where Perth’s rental vacancy rate in January was sitting at 0.9 per cent, its lowest level in 40 years.

The Real Estate Institute of Western Australia has been calling for government to commit to tackling the rental shortage, with concerns the state could quickly move from one of the most affordable in the country to the most expensive.

Encouraging investors back into the market via land tax rebates is one initiative the institute has proposed to boost rental stock in the short term, which could help limit significant price increases.

But apartment developer Paul Blackburne, a panellist at the event, said that was already materialising.

“I think you’ll find in the next few months that the 10 to 12 per cent growth rate the banks and economists are predicting has probably already happened,” Mr Blackburne told the forum.

“Prices have already gone up 10 per cent roughly, which puts them back to where they were two to three years ago, and I think they’ll go up another 10 per cent over the next 12 to 18 months.

“We property manage around 1,000 apartments around Perth.

That assumption is off the back of the easing of the rental moratorium, due later this month.

The moratorium was put in place during the early stages of COVID-19 to limit rental price increases and evictions, among other things, which REIWA said had likely deterred investor appetite, potentially exacerbating the rental stock shortage.

Beyond the residential rental market, Mr Blackburne is confident in residential sales for 2021 and beyond.

According to research from the Urban Development Institute of Australia WA, more than 10,000 new lots were sold during the 2020 calendar year, nearly double the number of sales the previous year.

Similar results have emerged in the apartment market, at least anecdotally, with ASX-listed apartment developer Finbar achieving $34.6 million in sales in January, which was its highest volume of monthly transactions since 2006.

While broader apartment sales numbers are yet to be compiled, Mr Blackburne is confident of moving stock throughout 2021.

“People will start to work out it’s cheaper to buy than to rent and that will keep the market going for years,” Mr Blackburne said.

While the vacancy rate has tightened in the residential market, the office market tells a different story.

Pre-COVID-19, vacancies were showing some signs of improvement.

However, the latest Property Council of Australia office market report found office vacancies in the CBD had increased to 20 per cent in the six months to January 2021.

The Perth CBD and West Perth now have the highest vacancy rates of any major city in Australia, but Primewest national leasing manager Jemma Hutchinson is hopeful of some green shoots this year.

“At Primewest, our portfolio is sitting at 92 per cent occupancy across Perth CBD,” Ms Hutchinson told those at the lunch.

“I do think the larger corporates will probably contract ... But we’ve got a diverse portfolio and I can’t say to date that we’ve had any contraction.

“Looking ahead to lease expiries, get on top of talking to tenants early, be proactive and forward plan.”

Ms Hutchinson said the mining industry still comprised a large proportion of the office market, with about 70 per cent of Primewest’s portfolio occupied by mining and resources companies.

The enquiry level from technology tenants was increasing, she said, pointing to a recent deal Primewest struck with mining software company MICROMINE.

The two floors have an interconnecting staircase, with level six featuring a spec fitout and balcony.

Ms Hutchinson said she had also been in talks with a Melbourne-based company seeking to diversify and set up a 150-person call centre in Perth.

“With mining resources being the best it has been in a long time … it’s an opportunity we need to take advantage of,” she said. 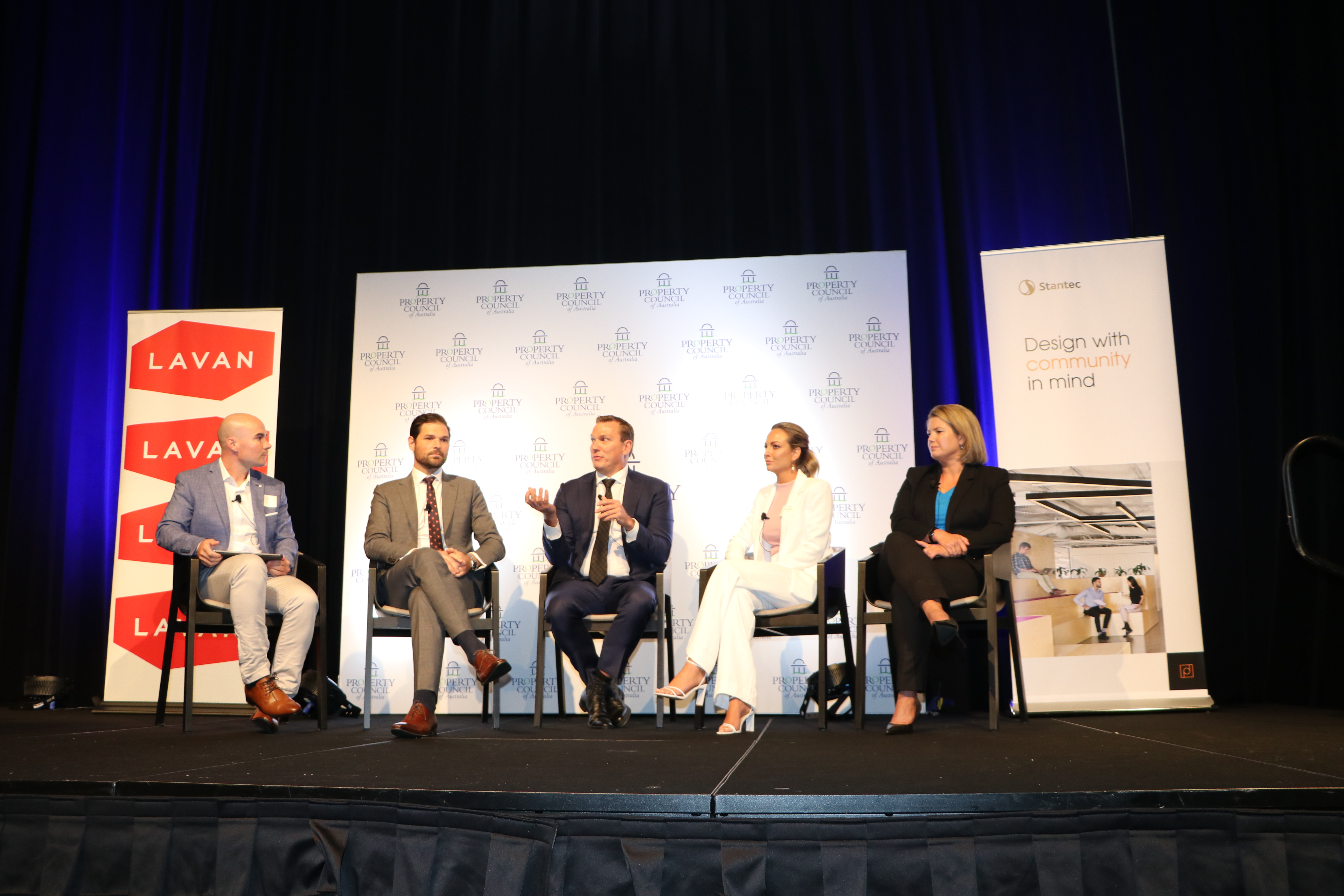 “Infrastructure has such an important way of stimulating growth by providing construction jobs, pre-planning … so it’s got a very long life associated with it.

“Obviously mining and resources are a big backbone of the economy, but moving into other areas like battery minerals, green energy ... defence, it’s such an important way of diversifying for the future.

“People come to WA first for a job, and infrastructure is great at getting that work moving.”

Finding people to fill those jobs, however, particularly during a pandemic, is one challenge for the property industry, particularly in the construction sector.

Attendees who completed the event survey named skills and labour shortages as their main concern for 2021, followed by border closures, red tape and population growth.

Professor Davies expects skilled migration to predominantly come from interstate movements, given the ongoing uncertainty related to international travel. In the long-term, she said, future international migration would depend on how many of those opportunities in property-related job markets were filled by locals.

With or without population growth, Mr Blackburne remained bullish on Perth property.

“You’re going to see a once-in-a-generation boom, I think there’s going to be huge growth, it’s like Groundhog Day of ’07 all over again,” he said.

“The only thing holding it back now is people just want to check that the vaccine works.”