Shares in Perth-based contractor Brierty slumped after it announced a 7 per cent slide in first-half profit to $4.06 million, as competitiveness ramps up in the sector. 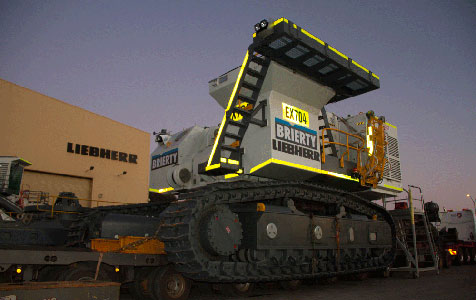 Shares in Perth-based contractor Brierty slumped after it announced a 7 per cent slide in first-half profit to $4.06 million, as competitiveness ramps up in the sector.

The company reported a 9 per cent fall in revenue to $135.7 million for the six months to December, with Brierty reaffirming guidance of at least $300 million in revenue for the 2015 financial year following the ramp-up of major contracts in the first half of the financial year.

Brierty said the revenue result reflected the transition phase for the mining division as work finished at Karara and ramped up at its $300 million contract at the Western Turner Syncline stage 2 project for Rio Tinto.

However, Brierty’s debt position rose to $24.9 million, up from $1 million of debt it recorded in June last year, as a result of a rise in hire-purchase agreements to provide equipment for the Rio Tinto contract.

“The result was broadly in line with the prior corresponding period, reflecting Brierty’s diversity and ability to continue winning and performing work profitably despite highly competitive conditions across the sector,” the company said.

Managing director Peter McBain said the company performed well in a difficult environment and remained busy on a number of major contracts.

“It was by no means an easy six months for us, and it is testament to the hard work and resilience at Brierty that we have continued to win quality work at both large and small projects in what is a very competitive market,” Mr McBain said.

He said although conditions remained highly competitive, there was still work to be won at quality projects.

“There are a number of good civil project opportunities across WA, such as further road upgrades for Main Roads WA, urban land development in Perth and major regional towns, and work at major infrastructure projects,” Mr McBain said.

“While there are fewer opportunities in contract mining, there is still scope for new work which we are targeting. We already have $150 million in revenue on major projects secured for FY16.”

Brierty shares fell 11 per cent during the day’s trade but gained back some ground, closing 6.8 per cent lower at 41 cents per share.