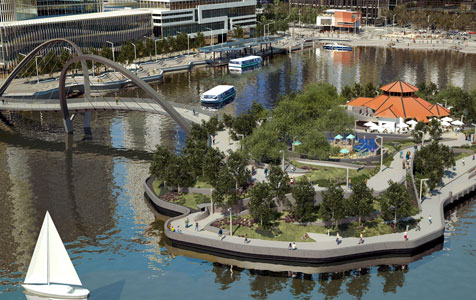 An artist's impression of the completed island and pedestrian bridge.

Construction and contracting firm Decmil Group will build the pedestrian bridge for the island at Elizabeth Quay, under a $19.9 million deal announced today, while the state government is also seeking artists to provide artwork across the public space of the $2.6 billion project.

The works will be done in joint venture with Structural Systems and Hawkins Civil.

The bridge will be 20 metres high, five metres wide and will have a 5.2 metre clearance from the water, to allow for boat movements in and out of the inlet.

“This is the second state government infrastructure project we have secured in recent months and we are excited to be part of a project that will transform the face of Perth,” Decmil chief executive Scott Criddle said.

“The award of this contract further demonstrates our ability to deliver complex civil construction projects.”

“This contract is another example of how the construction of Elizabeth Quay is benefiting the economy and creating local employment opportunities,” he said.

“To date, more than 140 small to medium companies have received work due to the project and it is expected to create more than 1,600 direct and indirect jobs during construction over the next five to 10 years.”

The contract was awarded by Leighton Broad, which is the managing contractor for the $440 million Elizabeth Quay inlet and public space development.

The inlet and public realm component of the project is expected to be complete by spring next year.

Work commenced on site around two and a half years ago. Construction of the inlet is taking shape.

The kiosk has been slated to become a flagship restaurant for Elizabeth Quay, with works expected to start later this year.

Meanwhile, Mr Day put out the call for artists for the public artwork component of the project.

He said up to 10 public art pieces would be commissioned, with a $1.3 million piece at the top of the inlet to become an entry statement.

“Art brings an exciting and interesting element to a new public space and this public art program presents some unique opportunities for talented artists to be part of this iconic project,” Mr Day said.

Other artworks for Elizabeth Quay include a piece at the Barrack Street Jetty incorporating signatures from school children that were removed from the Bell Tower in the beginning of construction, a collection of Aboriginal artworks and a sculpture of feminist and social activist Bessie Rischbieth, who rose to prominence in the 1960s.

Chamber of Arts and Culture WA chairman Warwick Hemsley said the Elizabeth Quay project should be the catalyst for a deeper engagement, which involved arts and culture being embedded in new spaces in the metropolitan area.

The state government already has a policy in place which requires 1 per cent of the cost of a development above $1 million going towards public art.

Mr Hemsley said that should be modified so that 1 per cent of the footprint of new developments was dedicated to continuous cultural activity.

"The chamber would welcome the opportunity to work with the government on how cultural infrastructure can be integrated into Perth's various public spaces so that visitors and residents can experience first-hand the creative wealth of Western Australia," Mr Hemsley said.