Breaking the Mould on Gender Equality 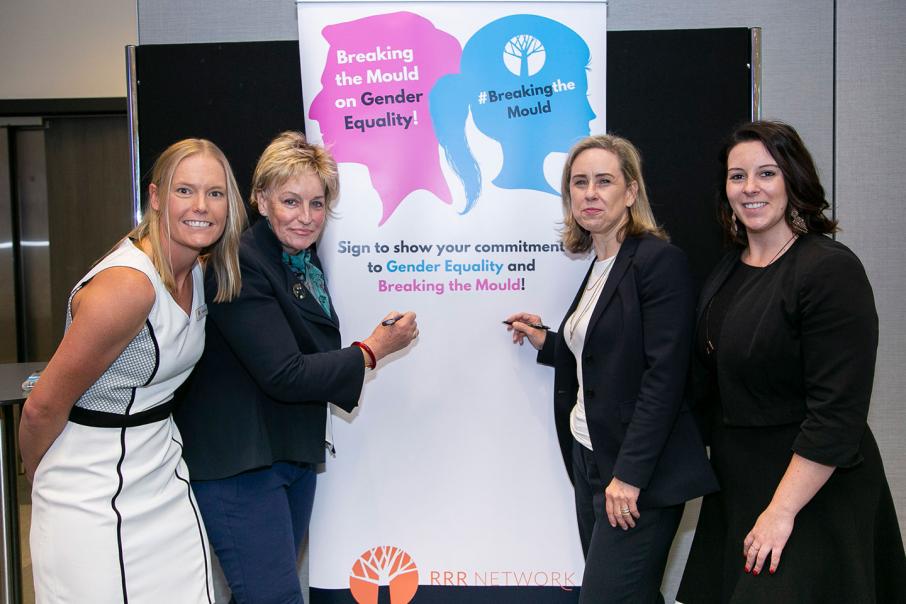 On Tuesday 15th October, the RRR Network of WA celebrated the International Day of Rural Women with more than 130 people at the Perth Convention and Exhibition Centre to discuss Breaking the Mould on Gender Equality.

There was good food, Margaret River wine, politicians, media, large and small business owners, executives, RRR members and students. It was a huge success and we got to hear from some influential leaders in the public and private sectors.

So, what is breaking the mould all about and why did so many give up their lunch break for it?

Let’s start with this….did you know that in 1969 Australia’s industrial relations system endorsed the principle of “equal pay for equal work”? A key reform which should have empowered all Australian women not only in the workplace but in society. Unfortunately, fifty years on and we’re still chasing gender equality.

For instance, women are less likely to be economically independent or achieve leadership positions and yet more women in W.A have university degrees than men.

Also, WA has the largest pay gap in Australia at 24% compared with a national average of 14%.

It is apparent that gender inequality is systemic and how we go about tackling it remains slow going. So slow in fact, that it is predicted it will take more than 200 years to close the global gender pay gap.

Breaking the mould on gender equality suggests challenging the status-quo, disrupting culture and habit but more specifically, it calls for increased measures in society and the workplace that will allow and enhance female participation.

Minister MacTiernan commented on how she is witnessing real success emerge in the WA regions but acknowledged we still have a long way to go – “Everywhere I go I see women taking on leadership positions…I’m seeing the men deeply appreciating their contribution. Adding enormously to the industry”.

Minister McGurk had the audience nodding their heads in agreeance when she said – “If we’re not aware to the challenges [gender inequality] of our state, we’ll be left behind”.

Tim Day, General Manager at South Flank BHP said their workforce comprises of 45% women and they have a target to achieve 50% by 2025. One way to reach this target is to promote flexible work. In fact, 46% of BHP staff are on some form of flexi work.

Another practical way to enhance female participation is to solve access to childcare. Alison Terry from FMG spoke of their 24 hour In Home Childcare program in Port Hedland to help families balance work and caring responsibilities.

And lastly, Michael McNulty from Deloitte said, “a lack of diversity can cause collapse”.

Guests and speakers signed the ‘Breaking the Mould’ banner – a commitment to tackle unconscious bias, to stand-up and recognise that gender equality is not only the right thing to do but the smart thing to do.

Social media feeds were filled with selfies with the banner and #BreakingTheMould even trended on Twitter for the duration of the event. The banner itself will be taken around WA regions by the RRR team until it is full.

The event would not have been possible without the support of ECU and although the event is over the conversations are still going strong.