Branding to give Anglicare voice 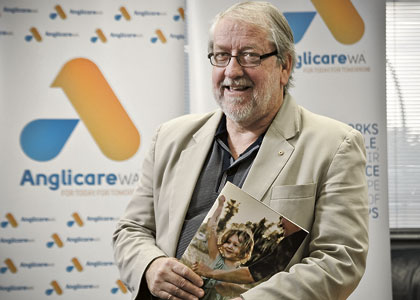 NEW LOOK: Ian Carter was keen to ensure Anglicare WA was given a strong face for its engagement with government. Photo: Grant Currall

It’s not common for a community services organisation to go through a rebranding process.

That is partly because not-for-profit stakeholders want to know what the value of a rebrand is and why money is being spent developing pretty logos instead of delivering services.

Not-for-profit organisations come up against this often. They question why they should spend money on seemingly superfluous things like new buildings, market research and glossy brochures.

Anglicare WA is one organisation that has been prepared to run the gauntlet and spend money on market research, developing a mechanism to measure the organisation’s results and outcomes and is about to roll out its new brand this week.

The rebrand was conducted by marketing and communications agency Rare, which developed a new logo, tagline and colour scheme to promote and define the organisation’s broad range of services and a colourful mosaic that will be used on a range of Anglicare WA’s promotional material.

Rare took the job on eight months ago after it came out on top of a tender process. It initially conducted a series of extensive workshops with the organisation’s executives, middle management, staff, suppliers and stakeholders to establish what the purpose of the rebrand should be.

Rare director Richard Beards said this was an interesting case because Anglicare WA did not need to attract new clients, its services are already in high demand.

The purpose was to develop a strong image to present to its government and corporate stakeholders, with the aim of potentially increasing support and moving into a bold style of leadership in lobbying.

Rare works from the premise that every industry is entitled to use branding strategies to home in on its audience, regardless of it being a not- for-profit or a commercial business.

“It doesn’t matter if it is a commercial or not-for-profit business, everybody needs to sell themselves to somebody,” Mr Beards said.

“There aren’t too many distinctions between those two groups, it is just about defining that audience.”

The old brand had been in place for 13 years and, after conducting market research, Anglicare WA discovered it was associated with ‘stodginess’ and ‘tiredness’.

The organisation is a complex beast, with 40 offices across the state. It provides 57 services to 38,000 people under the categories of relationships, finances, housing, youth, community and training.

This covers people across the spectrum of “only just surviving” right through to those who are “thriving”, as Mr Carter puts it.

The organisation’s new tagline ‘For Today. For Tomorrow’, was developed to respond to the question of how best to represent its extensive service range and client base.

Mr Carter was keen to ensure the organisation was given a strong face for its engagement with government.  It receives 70 per cent of its funding from government but that does not mean he is prepared to lie down and play dead.

“We have an ongoing mandate to not only deliver service, but to speak out,” he said.

“We didn’t want to be the cowering agency that just delivered services … we didn’t want to be just a deliverer of contracts, we wanted to be saying, ‘this is not good enough, housing affordability is a major crisis in Western Australia, homelessness is out of control, there is a two-tier society here’.

“We wanted to speak out about that and we have now consciously gone into that mode.”

Op shops have been synonymous with Anglicare WA since its inception in 1976 but Mr Carter said the organisation was considering the viability of the shops due to the retail downturn that had led to slow sales.

Discount department stores were also lowering prices to the level of those in op shops and therefore were new competition, he said.

The rebrand will be used across the organisation.