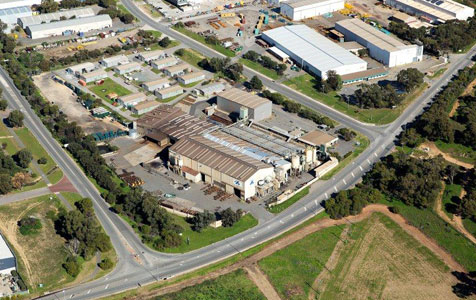 The property is located at 2 Sparks Road, near the corner of Russell and Cockburn roads in Henderson, and comprises 7,100sqm of office, warehouse and workshops, as well as a yard area of 2,500sqm.

Bradken announced in May that it was shutting down its facilities and cutting its workforce due to high costs.

Colliers International’s Wayne Chorley said Bradken had used the site as a steel foundry, with the specialist plant and equipment currently being removed to restore access to the workshops.

The site will be sold as vacant possession, he said.

“The well-located heavy duty workshop will attract strong interest from local and national owner-occupiers, engineering and manufacturing companies in Henderson, Naval Base and Rockingham, as well as developers and investors,” Mr Chorley said.

“We expect the property to attract multiple offers of $8 million-plus.”

He said Henderson was an attractive proposition for investors, with Chevron and Civmec recently establishing large-scale operations in the area.

The AMC is also one of Australia’s largest ship-building precincts, and has been the long-term Australian headquarters of Western Australia-based shipbuilder Austal.

“The major institutions have made their intentions clear and are actively hunting for industrial properties in the Perth market, while owner-occupiers are taking advantage of record-low interest rates and are acquiring their own business premises rather than leasing.”

About $250 million in industrial land transactions has settled during the past 12 months, with demand outstripping supply.

“The high level of owner-occupier activity has led to an increase in the vacancy rate for industrial properties for lease, with that figure increasing to 10.7 per cent,” Mr Chorley said.