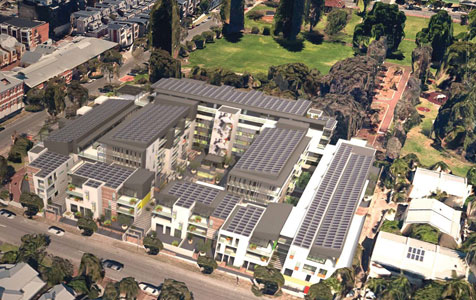 An artist's impression of the apartment complex.

A contentious $30 million, 125-apartment plan at the old bottleyard site on Palmerston Street on the outskirts of Northbridge is set to get the green light from the Metropolitan West Development Assessment Panel.

According to the DAP’s agenda documents, an application put forward by McDonald Jones Architects on behalf of developer Handle Property Group will be approved for development when the panel meets on Friday this week. The historic site was formerly owned by Alan Bond, who sold it to the City of Perth in 1987, while the bottling plant that operated on the site since the early 1900s was demolished in 1989.

A number of proposals have previously been considered for the site, with nine design advisory committee meetings considering the design.

Concerns over the scale of the development emerged in recent months, with more than 30 people, including representatives from the developer and the City of Vincent, attending a public forum at the start of August.

The plans were subsequently amended to have a maximum of three storeys on the Palmerston Street frontage, a maximum of four storeys on Stuart Street, while a six-storey building will be constructed on the Robertson Park side of the site.

The original application was for a five-storey development.