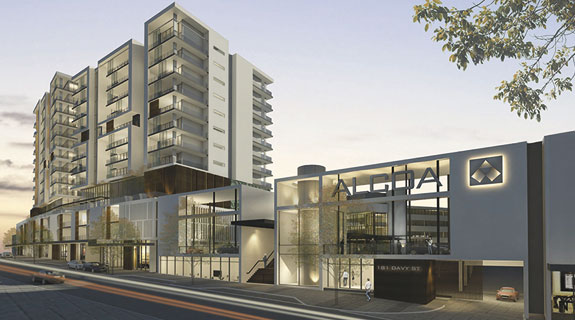 The first step towards a $750 million redevelopment at AMP Capital’s Garden City Booragoon shopping centre has been made, with the institutional giant’s joint venture partner, TRG Properties, applying to build 122 apartments on an adjoining site.

TRG’s City Gardens proposal is close to the proposed main street at Garden City, which is slated to include a new hospitality precinct to complement the retail offering of the mall.

It comprises two apartment towers – one of 15 storeys and the other of 13 – on a plot of land facing Davy and Marmion streets, next door to the existing Alcoa office building.

City of Melville Mayor Russell Aubrey said the council was aiming to establish Garden City as the vibrant heart of the area, saying he was thrilled the first major development application had been lodged.

“While the development application still needs to be fully assessed, the application appears to be broadly consistent with the structure plan and vision for the area,” he said.

“The multi-storey plan proposes two parallel towers and if approved will provide a blend of residential and commercial opportunities, with the added benefits of high quality street scaping and aesthetic design for the community’s enjoyment.”

Mr Aubrey also said there had been a long community consultation process to ensure the development was suitable for the area.

“We want our city centre to become the beating heart of the community, where people of all ages and abilities will feel welcome to live, work and play, becoming part of a new kind of neighbourhood,” he said.

“Throughout the planning process we worked with the community, the owners of Garden City shopping centre, key landowners in the area and local residents to inspire and inform the plan, while also seeking to ensure the quiet charm of our neighbourhoods surrounding the future city centre will not be lost.”

The redevelopment of Garden City has been in the works since midway through last year, when AMP Capital won approval from the Western Australian Planning Commission to almost double the size of the shopping centre to 120,000 square metres.

That would make it the largest shopping centre in WA, according to the BNiQ Book of Lists, however there are other shopping centres with significant expansion plans in motion.

Scentre Group’s Westfield Carousel won approval late last year to undergo an expansion to add 50,000sqm of space, which would take it to 130,000sqm.

Also in the northern suburbs, Scentre Group is planning a major rework of Westfield Innaloo, with the wider structure plan allowing for the development of up to 500 apartments.

Scentre Group is also planning to expand Whitfords City, with new planning regulations in place requiring one dwelling to be built for every 500sqm of new retail space.

Ultimately, nearly 740 apartments or townhouses are proposed for the wider Whitfords City area.

An AMP Capital spokesperson told Business News design works for the retail expansion at Garden City were still being undertaken, while it was expected a development application would be lodged before the end of the year.