Some WA publishers are rethinking their operations while others have achieved steady book sales. 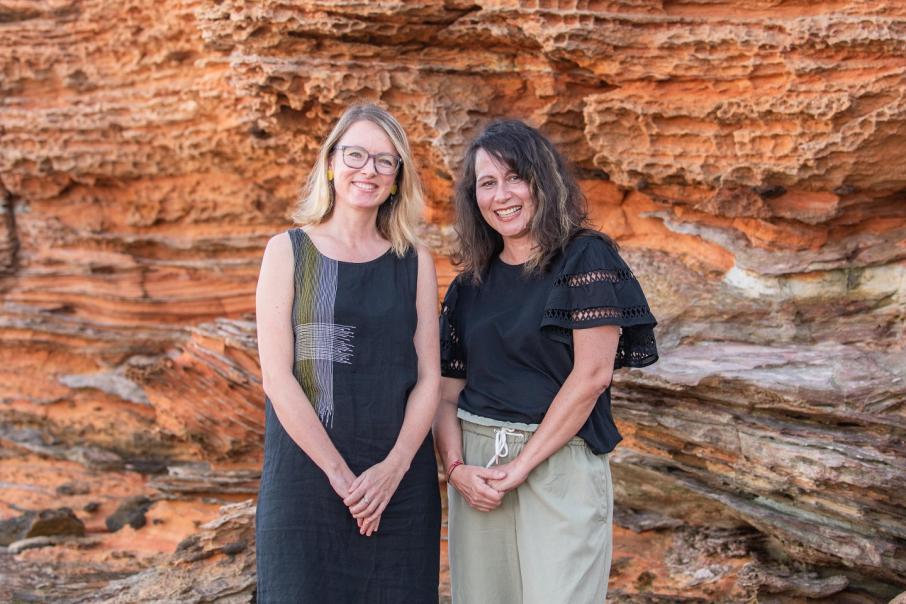 Business closures, empty classrooms and deserted streets were all hallmarks of this year’s COVID-19 lockdown in Western Australia.

But according to Fremantle Press chief executive Jane Fraser, another feature of the pandemic has been a rediscovery of our love of books and reading.

Data from Nielsen Book Australia shows book sales across Australia increased by 5 per cent from October 2019 to October 2020.

Ms Fraser said despite Fremantle Press not having released many new books this year, sales had remained stable.

“Ironically, sales started to remain steady but it was mainly our backlist books, our older books, that people were buying,” Ms Fraser told Business News.

Local book shop owner Natalie Latter, who runs Rabble Books & Games with her partner, Sam Baker, said she was surprised at the number of people who came to the bookshop asking for recommendations after not having read a book for years.

“For a lot of people, I think they picked up a book and remembered how amazing that could be,” Ms Latter said.

As a result, sales in March and April were in line with those before the pandemic.

She said the supply of books had ebbed and flowed, as publishers tried to mitigate the impact of the pandemic on authors.

“In March and April there was a long period where books were getting delayed, so instead of being released in March or April they are coming now, which is slightly overwhelming,” Ms Latter said.

Ms Fraser told Business News Fremantle Press had altered its publishing schedule and delayed the release of some books to ensure they reached the widest-possible audience.

However, this meant that April to September were lean months for the publisher, she said.

“There was a big gap in the middle there where things got very tight,” Ms Fraser said.

“We were very lucky in being a not for profit and a small business, we got government support.”

According to Fremantle Press’s 2019 annual report, about half of the publisher’s revenue was from sales, with the remainder from government grants and donations.

Anna Moulton, who is chief executive of another large WA publisher, Magabala Books, said sales plummeted when COVID-19 hit and the business prepared for a worst-case scenario.

However, sales unexpectedly bounced back in July in response to the Black Lives Matter movement, she said.

“Since then, we have had a streak of award-winning books and sales have continued to be strong,” Ms Moulton told Business News.

Among its titles, Young Dark Emu by Bruce Pascoe won the Children’s Book Council of Australia Eve Pownall award for information books, and the Australian Booksellers Association children’s book of the year in 2020.

Baby Business illustrator and author Jasmine Seymour won the CBCA Award for new illustrator, while activist and lawyer Teela May Reid was awarded the Daisy Utemorrah award for her junior fiction story, Our Matriarchs Matter.

Ms Moulton said the biggest impact of the pandemic was on the authors themselves, given the loss of income many suffered when literary festivals and school appearances were cancelled. “Not many people realise that appearance fees are a really important supplement to many authors’ incomes,” she said.

“Our printer in Adelaide has been overwhelmed by the number of publishers choosing to print onshore, instead of offshore,” she said.

“That’s good for Australian business, but means many new releases have been delayed as they can’t keep up with demand.”

Ms Moulton said between 65 and 80 per cent of Magabala’s income was from book sales, with the remainder coming from recurrent grants from the Australia Council for the Arts and the state government.

“We are very grateful for that support, which underwrites the work we do; many of the books we publish have important social and historical values, but may not be economically viable,” she said.

“We are seeking to grow that support base, because the exciting thing about philanthropy is that it allows us to do the things we have always dreamed of, but haven’t had the resources,” Ms Moulton said.

The news from publishers isn’t all necessarily upbeat, however. Recently, large WA players including UWA Publishing and Margaret River Press have announced they were reconsidering their offerings.

University of Western Australia announced the closure of UWA Publishing in November 2019, but backtracked on its decision after significant community pushback.

On its website, UWA said it was undertaking community consultation and would make a decision on the future of its publishing arm in coming months.

In a statement to Business News, UWA said the future design of UWA Publishing would be determined in coming months by the university’s senate.

Margaret River Press publisher and director John Wood told Business News a decision had been taken to pause the Margaret River operations, to focus on its other venture, Centre for Stories.

“That’s one of the reasons we have paused Margaret River Press, because it [Centre for Stories] is so absorbing and so terribly important,” Mr Wood said.

During its decade of publishing, he said, Margaret River Press had nurtured authors who had gone on to reach significant milestones and achieved the publisher’s goal of highlighting diverse voices.

“Margaret River Press in its own way has been remarkably successful in terms of bringing authors to bear and people who have won prizes and first-time authors, as well as just general books on the region that might not have been published,” Mr Wood said.

“So to that extent, I think it’s made a community contribution.”

However, Mr Wood said the publishing industry was a tough game as a private operator, and he had subsidised the operation for the past 10 years.

“Our eyes were wide open that you really need to subsidise a publishing activity,” Mr Wood said.

He said any decision on reopening Margaret River Press would be made at a later date.

Rabble Books & Games’ Ms Latter said this year’s changes would have an impact on the local writing scene.

“Margaret River Press has been important for supporting a lot of emerging authors through some of their anthologies,” she said.

While more established publishers are redefining their operations, some new and niche organisations are making a name for themselves by highlighting work on the fringes.

The pair focuses on non-traditional stories outside the mainstream and published their first anthology of flash fiction, Once: A selection of short stories, in January and is now working on a second. 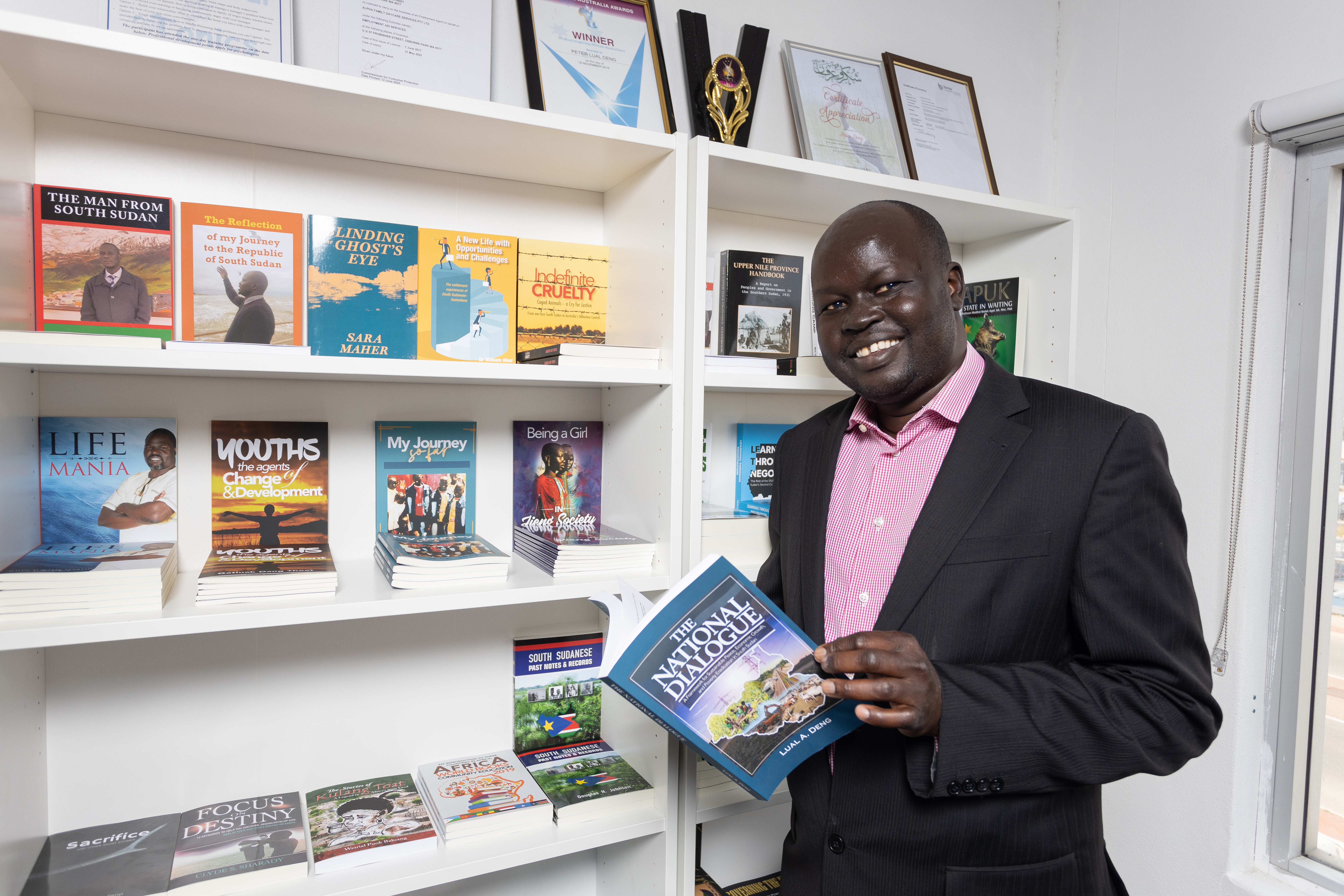 Peter Deng established his business in 2013, after arriving in Australia from a Kenyan refugee camp in 2006. Photo: Gabriel Oliveira

Africa World Books founder Peter Deng established his operation in 2013, after arriving in Australia from a Kenyan refugee camp in 2006 and struggling to find books about South Sudan.

Mr Deng has published works from local authors, but people in South Sudan write most of his books.

While Mr Deng sends the books he publishes all around the world, he said the venture wasn’t financially rewarding and was more of a community service.

“I started Africa World books to encourage reading culture in the community, to make this reading material available in the reach of the people and also to make it easier for young authors,” Mr Deng told Business News.

“Dealing with someone when you don’t know their traditions or culture or beliefs is very confusing and I thought it was a good idea to provide reading materials to service providers and families,” he said.