Competition in the state’s investment banking sector is hotter than ever despite a fall-off in takeover deals and capital raisings last year. 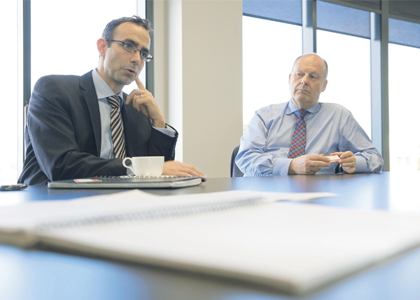 Competition in the state’s investment banking sector is hotter than ever despite a fall-off in takeover deals and capital raisings last year.

THE past year has been relatively lean for Perth dealmakers, with the total value of WA-related corporate finance deals falling 40 per cent to $33 billion, WA Business News’ annual survey of the sector has found.

The slump would have been even more pronounced if not for a handful of very large deals in the oil and gas and mining sectors. However, most of these deals were completed without the involvement of local investment bankers, so the lucrative advisory fees were not up for grabs.

The slowdown was spread across the two major components of the market.

The value of announced mergers & acquisitions (M&A) deals was down just more than 40 per cent to $27.8 billion.

It was a similar story in equity capital markets (ECM); the value of capital raisings (completed initial public offerings and announced secondary raisings) dropped 37 per cent to $5.2 billion.

A handful of investment banking firms retained their ranking as market leaders; the challenge they face is to maintain their lead as global investment banks continue their efforts to muscle into the WA market.

Macquarie Capital, which has bolstered its Perth team with the recruitment this year of former Gresham Advisory Partners WA managing director Justin Mannolini, was arguably the number one firm in Perth last year.

It advised on nine announced M&A deals worth $3.6 billion and was lead manager (or joint lead manager) on 12 capital raisings worth $315 million.

Perth-based firms Hartleys and Azure Capital also ranked highly, with a good mix of deals across both the M&A and ECM segments.

That sets them apart from many of their competitors.

Conversely, Sydney-based Gresham Advisory Partners is active in the advisory space but does not have ECM capability.

Of the global heavyweights, UBS continues to make an impact, though the number and value of deals it worked on during 2012 was well below its 2011 performance, when it was ranked as the number one firm in the WA market.

The oil and gas sector was the biggest contributor to M&A activity in 2012, accounting for an estimated $12 billion worth of announced deals.

The largest deals involved the Browse gas fields, with Japan’s MIMI (Mitsui and Mitsubishi) spending $US2 billion to acquire some of Woodside’s equity and PetroChina spending $US1.6 billion to buy BHP Billiton’s stake.

Based on the announced value of these deals, WA Business News has estimated that a third big Browse deal - Shell’s asset swap with Chevron, which gave Shell a bigger stake in the gas fields - was worth approximately $2.7 billion.

Other big oil and gas deals, which were not separately valued, saw Japanese groups acquire equity in the Wheatstone and Prelude projects.

The nature of these deals means that local advisory firms were not involved, though they did bolster the workflow for Perth lawyers (see next week’s edition).

In the mining sector, it was a similar story.

The prominence of Asian investors - particularly Chinese investors - was a recurring theme.

Chinese groups, including PetroChina, Hanlong Mining, Chengdu Tianqui Industry Group and Zijin Mining Group, were behind some of the largest announced M&A deals.

In total, Chinese groups accounted for about $6 billion of announced M&A deals.

In the ECM segment, market leader Hartleys bucked the overall trend by increasing the number and value of capital raisings it worked on during 2012.

It worked on 25 transactions worth $543 million, compared to 22 deals worth $369 million in the previous year.

The slump in WA activity was mirrored on the east coast and most international markets.

The tough market conditions made it particularly difficult for IPOs; only 32 were completed in WA last year, down from 59 the year before.

The notable exception to the downturn was Calibre Group’s $75 million IPO, which was jointly managed by Goldman Sachs and UBS.

The local investment banking scene received an early New Year jolt this month when it emerged that Gresham was losing its local chief Justin Mannolini to national rival MacCap.

Mr Mannolini’s decision to shift from boutique player Gresham to Australia’s only international investment bank continues a trend of local star players steering clear of the major global players, which have been hunting for Western Australian ‘rainmakers’ for more than two years.

Despite the lure of huge brand names, well-connected Perth investment bankers have been wary of leaping into the arms of multi-national businesses that have a reputation for being transient when it comes to establishing themselves in distant outposts like Perth.

The results speak for themselves, with the top corporate advisory spots held by local and national firms, plus a sprinkling of foreign players that have been more innovative than just trying to poach a big name to establish a presence in Perth.

MacCap, which is locally headed by Craig Carter, has proved adept at staying ahead of its global competitors in developing its Perth base and competing with more boutique companies that used to dominate much of WA’s investment banking scene.

With many of the world’s deal-making capitals still struggling economically, business in Perth is relatively brisk (even though it is down compared to 2011) and many global firms have been trying to get a toehold here.

“I have had a lot of discussions with a number of international banks looking to establish a presence in WA,” Mr Mannolini said.

“(But) Macquarie’s commitment to the market is a lot more tangible.

“I also get to work alongside people who are best in class in terms of what they do; it is important to have that peer interaction.

“It is not just an outpost.”

Nevertheless, global players have created a toehold in WA, often repatriating a Perth-born employee on the way up the corporate ladder and then recruiting a more established local adviser at the other end of their career.

UBS is a successful example of this approach.

For more than two years it has been running with experienced Perth director Neil Hamilton as a senior adviser to its Perth office.

Mr Hamilton joined UBS when Tim Day returned to WA to head up the local business after serving time on the east coast with the Swiss-based firm.

That move came after a false start when UBS moved high-profile investment banker Richard Saywell permanently to Perth in 2007, only to have him leave 18 months later.

UBS had established a strong business in WA, but its local deal-making prowess appears to have been served well under the current arrangement.

In these lean times UBS has been picking up smaller ECM work than might traditionally have aimed for, but which has become more important in the absence of large global deals.

Lazard has sought to mimic this tandem-talent approach, having established an office here in mid-2010 when it shifted Perth-born Trent Lisle back to his home town.

In June 2011 Lazard also took a stake in Perth-based oil and gas consultancy RISC, which has its own corporate advisory ambitions despite the departure of former CEO Tim Woodall to form Miro Advisers.

Lazard has not been without success here -it sits among the top 10 M&A advisers in terms of combined deal size, including BHP Billiton’s sale of its Yeelirrie uranium assets - but it clearly believes it has to do more to generate local business in the more active mid-tier sector.

Mr Scudamore is chairman of Amana Living, a director of MDA Insurance, and was recently appointed an independent non-executive director of Aquila Resources.

Also adding a permanent presence in the Perth investment banking scene in the past two years are: GMP, which recruited Karl Paganin after he left Euroz; Credit Suisse, which opened an office in 2012 with another returnee Craig Milton; and Goldman Sachs, which attracted Peter Watson from Macquarie Capital in August.

Deutsche Bank also returned to Perth last year after a 10-year absence, but only with markets specialist Grant Gibson. It is believed it remains on the hunt for a Perth corporate advisory presence.

Meanwhile, during the same period, Adrian Arundell left KPMG for Azure Capital; Brian Beresford and Maurice Argento went from PwC to Euroz (Mr Argento has since left); Neville Gardiner resigned from Merrill Lynch to establish Torridon Partners; and Merrill Lynch brought Chris Bingemann back to be a local presence in what has become a coleadership role with the group’s Sydney-based natural resources head David Wood.

• Next week: how the lawyers rate.