Bogan bingo and burlesque at the Fringe 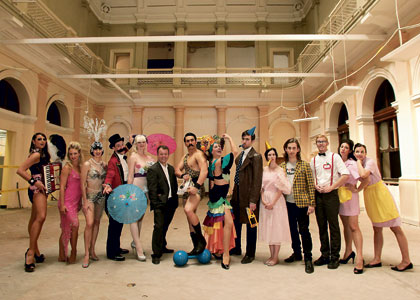 PERTH’S first Fringe World festival got under way last week with a program that includes 150 weird and wonderful acts, living up to the Fringe ideal of a program that offers everything the mainstream arts sector does not.

Up to 800 artists will perform across 30 venues in the three-week festival, including a large contingent of burlesque and cabaret along with music, comedy, circus, theatre and dance.

The extent of the full program this year shows impressive growth, given the pilot program involved 100 shows from 160 artists.

Returns from the first four days of the Fringe indicate as many as 5,000 people attended ticketed events, with ticket sales totalling $100,000.

Ten different shows sold out sessions across various venues including the ‘beefcaked’ performers in variety show Briefs at the Spiegeltent, and Bogan Bingo, a comedy game of bingo with a 1980s and 1990s music theme; in addition, 40,000 people attended free events including activities in the Perth Cultural Centre.

At the time WA Business News went to press, ticket sales had reached $450,000 with more than 19,000 tickets sold for events across the three weeks of Fringe.

The comedy venue ‘hub’ surrounds the James Street side of Northbridge, while the Perth Cultural Centre is a hub for cabaret and burlesque performances.

A unique performance precinct for this year is the Old Treasury Building, with the central bar areas dubbed the ‘Treasure Chest’.

It is the first time the site has been open to the public in 15 years and Fringe has set up seven different performance areas in the 136-year-old building precinct, which is to be redeveloped by FJM Equities and Mirvac into commercial and residential space later this year.

The central vaulted postal hall will host one of the stages, with a mermaid tank erected in the temporary garden bar. Perth Town Hall is another of the venues.

In opening the Fringe, Premier Colin Barnett said the Treasury site, along with the antique transportable performance arena acquired for the festival, would add to the spectacle.

“The Spiegeltent – a 1905 dance hall from Belgium – is a truly unique and beautiful venue and the Old Treasury Buildings come to life after being empty since the early 1990s,” he said.

Artrage chief executive and Fringe World festival director Marcus Canning has worked to re-establish the Fringe Festival in WA, which first started in 1983 and ran for five years.

“Part of the beauty and power of Fringe is that it is open access, and that if there is the need it will prevail to the scale it needs to be. And the need was there, and here we are,” Mr Canning said at the opening on Australia Day.

“Here we are, at the birth of something marvellous, something that will mean much to many, not just for the next few weeks, but for decades to come, as it continues to grow.”