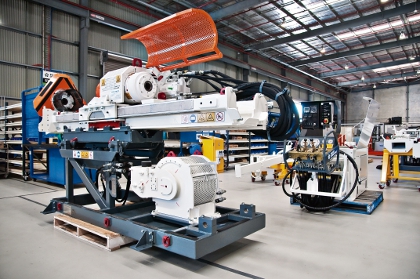 Two years after opening a new manufacturing hub in Perth, international drilling company Boart Longyear has announced it will shift the operation to Poland as it seeks to cut costs.

The closure of the Forrestfield manufacturing facility was one of several cost-cutting measures announced today, as the company also disclosed another downgrade of its earnings outlook.

Boart said it would cut annual costs by about $US70 million, or 20 per cent of its total overheads, as it deals with lower demand from mining companies for its drilling services.

The savings initiatives were expected to cost $US15 million to $US20 million, the company said, but offered no further information on the number of job losses.

Chairman and interim chief executive David McLemore said the company's earnings forecast had been reduced because margins were not being achieved due to delays in staff reductions.

Boart now expects earnings before interest, depreciation and amortisation (EBITDA) in the 2012-13 financial year in the range of $US310 million to $US320 million.

That is down from its previous forecast of $US360 million to $US390 million, most recently confirmed in October.

"Revenues are broadly consistent with expectations, but margins in drilling services have been impacted due to timing of cost take-outs associated with headcount reductions," Mr McLemore said in a statement.DRILLING services contractor Boart Longyear has officially opened a manufacturing plant in Forrestfield, one of seven centres servicing its global operations.

The facility was designed to produce up to 220 rigs per year, plus a wide range of drilling consumables, and employ up to 120 staff.

About 60 per cent of the facility’s output was sold domestically, with the balance sold in Africa and South America.

Boart’s other manufacturing facilities were in the United States, Canada (two), Germany, Poland and China.

Boart’s competitors include Ausdrill, which in 2010 invested $20 million in a new manufacturing facility in Canning Vale.