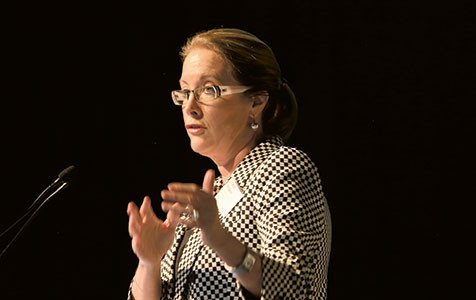 The business community's continued failure to increase female representation at board and executive level has drawn fresh arguments for mandatory quotas and more flexible working conditions, with the figures in this state particularly concerning.

The pros and cons of requiring ASX-listed companies to allocate board seats and executive roles to women have been discussed years, with voluntary targets initially agreed as the best option.

The result of this strategy has been an improvement in female representation Australia-wide, but according to Sex Discrimination Commissioner Elizabeth Broderick, the initial uptick may have reached its peak.

"We hit a high point when 28 per cent of all appointments to ASX200 boards were women, and it's dropped back down to something like 18 per cent now," Ms Broderick said.

In her view, it indicated a limitation of improvements brought by voluntary targets.

"I came out several years ago very firmly in favour of quotas and ... we saw a marked increase at that point, but we may be getting to the point now where we're just trending off," Ms Broderick said.

"Quotas are a temporary special measure, they're a jog to a misaligned system, they're necessary for a transition phase.

"If we can't fix this issue through a voluntary target regime ... maybe we need to do something else."

"We are supportive of voluntary targets [not quotas], but we're very concerned to see people do it properly," Ms Conway said.

"What we're seeing is people are just picking numbers out of the air, they're not meeting the targets; it's tainting the issue, and then that increases the call for quotas."

Ms Conway drew attention to WA's poor performance in comparison to the rest of the country – a recent survey conducted by the agency found only 4 per cent of ASX200 companies headquartered in Perth had female directors compared to the national average of 12 per cent.

"[That model] is about being anywhere, anytime, 24-7 and it's a stereotype that expects, even demands, overtly competitive and self and family sacrificial behaviour if one is to be on the A-team," Mr Robb said.

Ms Broderick said that lack of flexible working was jeopardising Australia's productivity, and needed to change to entice women into more senior roles and subsequently improve productivity and competitiveness.

"If we think we're going to continue to be internationally competitive in a global knowledge economy, with 50 per cent of the talent sitting somewhere else, we're kidding ourselves," she said.

"We're cutting out over 50 per cent of the talent purely because we're sufficiently unimaginative to think about any other way that job could be done.

"We need to push back ... the only way we can do it is by encouraging our senior men into flexible work arrangements."

Ms Conway has joined the calls for more flexibility in working arrangements, saying that if men led the way it would do wonders for promoting more women into leadership roles.

"If you look at the research, men want flexibility too – they're just too scared to ask for it," Ms Conway said.