Mark Wallace is excited about the international opportunities available and the hard work involved. 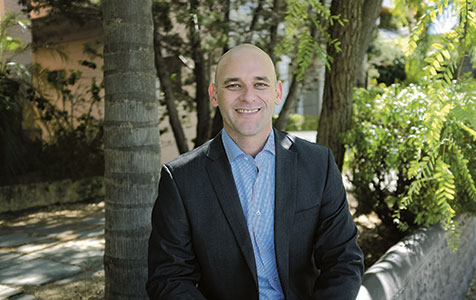 IN MOTION: Mark Wallace believes if everything is under control, you are going too slowly. Photo: Attila Csaszar

Mark Wallace is excited about the international opportunities available and the hard work involved.

Blue Zoo executive director Mark Wallace laughs now at how naive he was at the age of 26 when he and two others started the West Perth-based management consultancy.

At the same time, however, he recognises it was this wide-eyed enthusiasm and a willingness to dive in headfirst that has helped the business grow into international markets.

In 2006 Mr Wallace piled his plate high – starting a business, getting married and buying a home.

Today his enthusiasm for having lots of balls in the air remains as he steers Blue Zoo’s sales division into Singapore, Malaysia, Canada, the UK, South Korea and Cambodia.

Mr Wallace established Blue Zoo with two fellow directors after working as a senior consultant for Bankwest and realising there was a market for doing things differently.

Blue Zoo now competes with the big four accounting firms in the provision of consulting services for governance, risk and ethics.

Mr Wallace said the name Blue Zoo came from wanting to stand out from an austere crowd and portray a business that offered a point of difference.

“I think it’s almost a breath of fresh air sometimes on the corporate side. I think people get sick of the big four and they like a fresh or different approach,” Mr Wallace told Business News.

Starting a business during the mining boom taught Mr Wallace that the hiring and retention of good staff required a flexible approach.

“In order to attract and retain people we really just let it hang out a little bit. There’s no nine-to-five culture; if the outcomes are there, you can work however you like,” he said.

While consulting makes up its core business, 20 per cent of Blue Zoo’s revenue comes from selling a cloud-based software tool called Governance Manager, which was developed in house and used initially to improve its own business.

“We were trying to capture all our specialist experience and knowledge into a tool that could be used by other staff without as much experience so that they could provide a higher quality service,” Mr Wallace said.

“A couple of customers got hold of it and … saw the benefit of using it themselves, and at that point it morphed from an internal thing to something we decided we were going to commercialise and sell.

The software has allowed Blue Zoo’s staff of 12 grow the business through partnering with retailers across the world.

“The consulting part is what pays the bills and it’s the governance software that ultimately will make the company more valuable and grow quickly,” Mr Wallace said.

Expanding into new markets didn’t come without a bit of pain, however, as Mr Wallace learned when tragedy struck more than a year ago.

His friend and software sales partner in Singapore, after three years of establishing a presence and nurturing relationships, suddenly and unexpectedly passed away.

The loss was a great shock to both Mr Wallace and the business. Aside from the personal implications, he said it taught him of the need for the business to implement new procedures to keep track of progress and not risk losing networks or having to backtrack without much guidance.

Mr Wallace’s challenge now is to balance his growing workload as the business’s resources are pulled in different directions by different international markets.

“The thing that interests me is the international stuff,” he said.

“That’s what excites me now, the cultural differences, in particular with governance, is really interesting … and catering for that is really exciting.”

To cope, Mr Wallace said, he had grudgingly learned to delegate tasks after years of handled a lot of marketing, software development and client work himself.

“(My leadership approach includes) not asking someone to do something you wouldn’t do yourself. In the last few years I can’t quite do that as much as I used to, I probably take things on sometimes that I should be delegating,” he said.

“There’s always something to learn the hard way and I think that’s what makes it fun.”