SPECIAL REPORT: Paul, Nathan and John Blackburne are proving that they don’t have to work for the same company to leave a family legacy in Perth’s property industry. 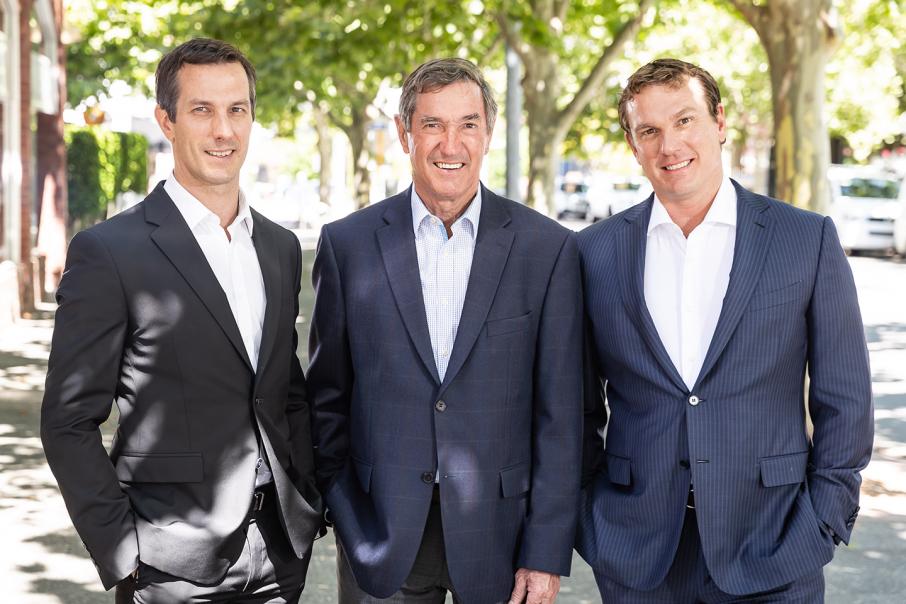 Nathan (left), John and Paul Blackburne have all succeeded in their own right. Photo: Ryan Ammon

SPECIAL REPORT: Paul, Nathan and John Blackburne are proving that they don’t have to work for the same company to leave a family legacy in Perth’s property industry.

Paul and Nathan Blackburne have risen to the top in their respective careers – one the founder of one of Perth’s most prolific apartment developers, the other the chief executive of listed property firm Cedar Woods.

But the brothers are quick to downplay their achievements, instead saying their father, John Blackburne, has made a bigger impact on the Western Australian property sector.

From 1967 to 2004, Blackburne Real Estate was one of the most recognisable names in Perth property, developing more than 3,100 apartments in 144 buildings across the metropolitan area.

“We were a very diverse real estate company, probably one of the most diverse in Perth,” John told Business News.

“We did everything from property management to strata management, development, marketing and home sales – we did what a traditional real estate agency would do, but a lot more.

“At that stage it was a big business and it gave Paul and Nathan the opportunity to see the diversity of the property industry.”

At its peak, Blackburne Real Estate had more than 8,000 residential and commercial properties under management; but it was its development activity, and the partners it brought with it, that Nathan Blackburne said ushered in lasting change in Perth property.

“In the late 1990s, dad’s business, which I was working for at the time, was shortlisted for the Burswood Lakes development near the Burswood Casino,” Nathan said.

“We did not have the capacity as a family to undertake that project, and we had the idea of getting on the phone to one of the big east coast listed property developers and introducing them to Perth.

“Dad phoned Bob Hamilton, who was the managing director of Mirvac, and asked if he would be interested in partnering with us on a major project in Perth.

“There was a positive reception, they came over and ultimately the Blackburne-Mirvac bid was successful in securing Burswood Lakes.”

Another watershed moment for Blackburne Real Estate, and the wider Perth property sector, occurred in 1996, after the developer was selected to undertake the development of Subiaco Square.

“Subiaco Square, at the time, was the largest urban renewal project in Australia,” John said.

“It doesn’t seem like it today, but in those days it was, and it was a significant achievement for me to win that project.”

At Subiaco Square, Blackburne Real Estate also sought to bring in an east coast partner, finding its match in the ASX-listed Stockland.

“Dad introduced Mirvac and Stockland to their first opportunities here; Stockland with Subiaco and Mirvac with Burswood Lakes,” Nathan said. 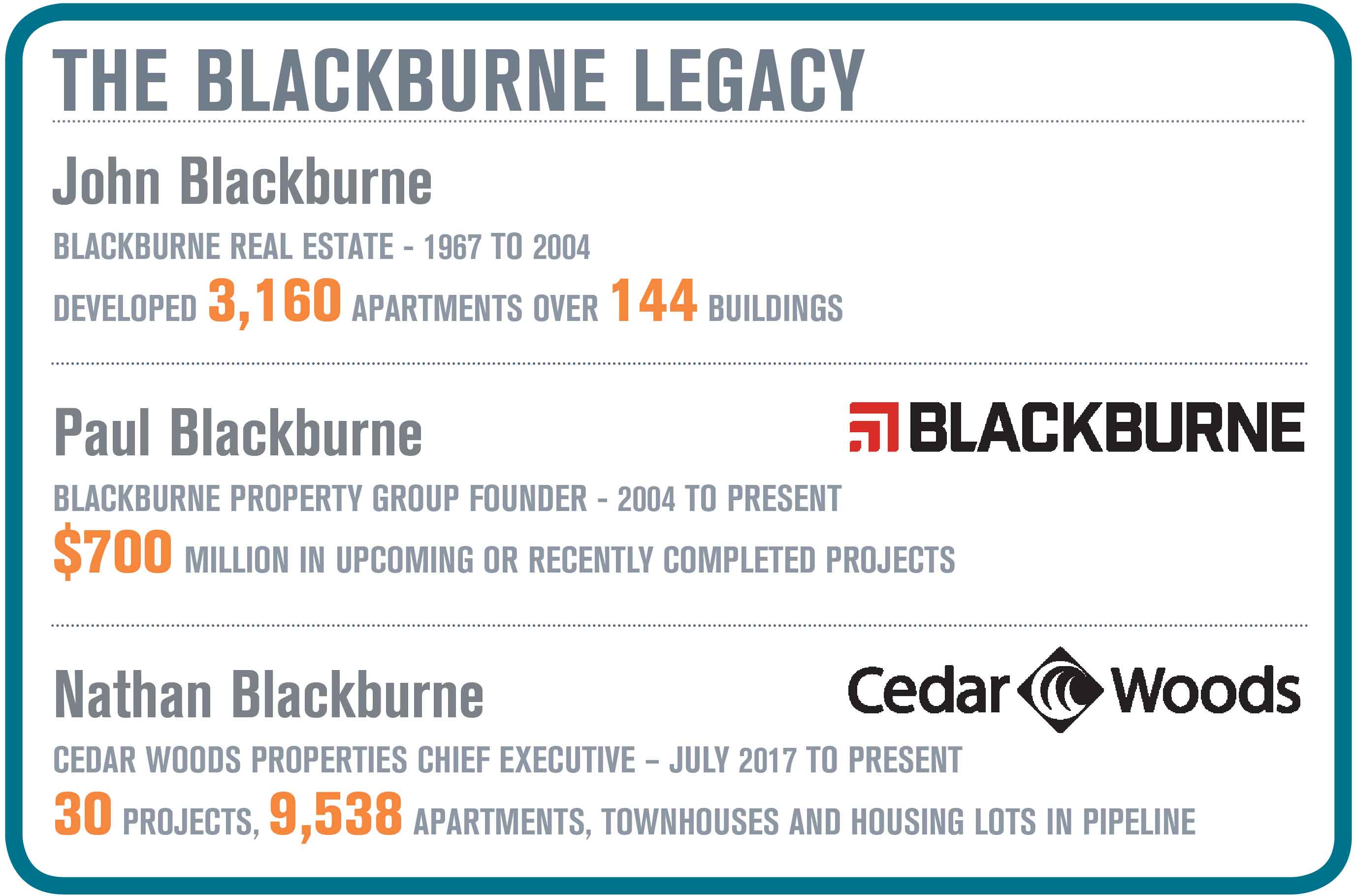 While the brothers are quick to credit their dad, John is reluctant to take full credit for his influence in Perth property, despite his extensive record of success.

“I had partners who were very good and very supportive of the things we did,” he said.

“The credit can’t all go to me. I may have instrumented a lot of it, but my partners were very good in running their divisions.”

Fast forward to 2018 and John is still active at Blackburne Property Group, working part-time as a member of its three-person board of directors and providing his insight into high-level decisions such as site acquisition, product mix and financing.

Blackburne Property Group was established in 2004, after Paul obtained a loan to buy part of the rent roll from his father’s company, which at that time was known as Blackburne and Joyce Real Estate.

For the first half decade, Blackburne Property Group, now Blackburne, was involved in real estate and project marketing, and it wasn’t until 2008 that Paul decided to pivot the company’s strategy towards apartment development, when most others had exited the market in the wake of the GFC.

It proved to be a savvy move, with Blackburne today having a long run of success that has resulted in its current $700 million in upcoming or recently completed projects, making it one of Perth’s largest apartment players.

And in a serendipitous coincidence, one of Blackburne’s flagship projects provides the opportunity for significant Subiaco renewal, as it pursues a mixed-use redevelopment of the derelict Pavilion Markets.

However, despite his father’s achievements and influence, Paul said it was never his intention to carve out a career in property.

“I was always adamant growing up and into my 20s that I wasn’t going to work in property,” Paul said.

“I had little interest in it, as I wanted to work on aid projects, but I think I subconsciously learned a lot about property just around the dining table.”

Nathan, the older brother of the pair at 46 compared with Paul’s 43, said while there was no pressure from his father to enter the property industry, it seemed to him to be a logical move.

“We could see he enjoyed it and we could see that it served him well,” Nathan said.

“From that sense it was infused in me and when it came to choose a university degree I was keen to do property.”

Like Paul, Nathan spent several years working with Blackburne Real Estate, but decided to make his own way in the property game in Melbourne after being involved in the Mirvac-Burswood Lakes discussions.

Nathan began working at Cedar Woods in 2002, setting up satellite offices for the Perth-based land developer in Melbourne, Brisbane and Adelaide, before ultimately returning to Perth in 2017 and succeeding then-chief executive Paul Sadleir in the company’s top role.

While the brothers say there’s no sibling rivalry with regards to who is the top achiever, due to Blackburne and Cedar Woods operating in two largely separate sectors of the property industry, they’re not tempted to join forces and work together.

“There hasn’t been any opportunity, thought or discussion that a joint venture may happen,” Paul said.

“We both have enough capital and enough expertise that there’s no benefit in a joint venture.

“It doesn’t mean that there wouldn’t be in the future, however, it’s just as likely for us to joint venture with any other developer than Cedar Woods, which is very unlikely.”

And even if they don’t work together, John said both sons’ lofty achievements filled him with pride.

“They’ve taken the opportunities that they’ve had,” John said.

“In Paul’s case, he’s started his own business and has done the Blackburne name proud, and in Nathan’s case, he’s become CEO of one of largest property developers in Australia.”