Construction has begun on Blackburne’s 22-storey, 140-apartment Oracle project on the outskirts of the CBD in Northbridge, the first building to start in a proposed wave of development around Stirling Street worth just less than $1 billion. 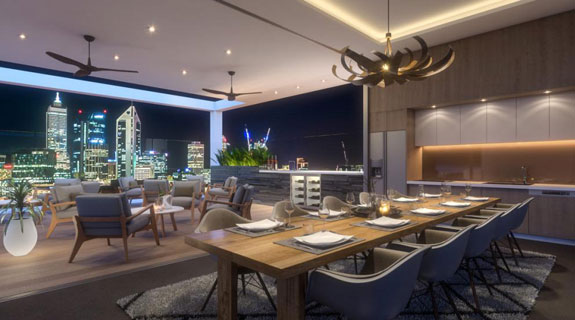 An artist's impression of the amenities on offer at Blackburne's Oracle.

Construction has begun on Blackburne’s 22-storey, 140-apartment Oracle project on the outskirts of the CBD in Northbridge, the first building to start in a proposed wave of development around Stirling Street worth just less than $1 billion.

City of Perth Lord Mayor Lisa Scaffidi was on hand today to officially break the ground for the project, which will be built by national construction contractor Probuild.

Oracle is the first of nearly $1 billion worth of apartment proposals to have won planning approval in the precinct, including a $680 million development at the old Megamart site on nearby Beaufort Street.

Blackburne managing director Paul Blackburne told Business News it took around nine months to achieve sufficient pre-sales to finalise a $40 million finance facility for the project (pictured below), a result he considered to be solid in current market conditions. “Oracle is a 140-apartment luxury project so to get pre-sales is a good achievement,” Mr Blackburne said.

“Because it’s a high-end product, we’ve appointed a tier-1 builder in Probuild.

“They have started on site and will be finished in around 18 to 20 months.”

Mr Blackburne said buyers had been attracted to the project’s close proximity to the CBD and the Northbridge entertainment precinct, as well as the design of the development.

“Between 80 and 90 per cent of the buyers are local owner-occupiers, and that’s because of the common facilities,” he said.

Facilities on offer at Oracle include a rooftop entertainment deck, full gymnasium, yoga rooms and an infinity pool.

The development is in a precinct that has been popular with developers over the last few years.

Also on Stirling Street, Stirling Capital has three project proposals, with its $80 million, 19-level, 136-apartment Verdant the most advanced.

Stirling Capital executive director Luke Reinecke said 55 apartments as well as a hospitality tenancy had been sold at Verdant, with construction expected to begin before the end of the year.

Sales for Stirling Capital’s $100 million One Hundred and Eight will be launched this month, with the 32-storey tower proposed to comprise 168 dwellings.

The developer has also lodged an application to build a 543-bed student accommodation facility at 89-95 Stirling Street, which will be privately managed.

Mr Reinecke said the Stirling Street precinct was coming onto the radar of many apartment buyers, both investors and owner-occupiers.

“We are certainly seeing stronger interest than six months ago,” Mr Reinecke said.

“With Perth being at the bottom of the property cycle, now is a good time to get into what will soon be a highly sought after area.”