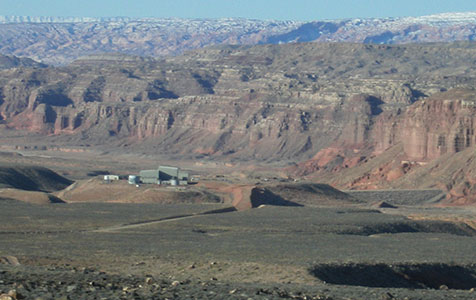 Shootaring Canyon mill in Utah, US.

Subiaco-based uranium explorer Black Range Minerals has announced it will pay US$10 million to acquire Canadian miner Uranium One's Shootaring Canyon mill in the US.

The payment for the mill, which Black Range said would help fast-track it into a uranium producer, includes $US8.5 million for a government environment bond.

ASX listed Black Range will finance the acquisition with a $17.5 million capital raising through Azarga Resources, which has a 19.6 per cent shareholding in Black Range.

The Hong Kong based investment company will provide an $11.5 million convertible note facility at an interest rate of 10 per cent per annum.

Azarga will also fully underwrite an equity raising of $6 million at an issue price of 1.4 cents, which is a 15 per cent premium to Black Rock's 30-day volume-weighted average price.

Black Range said acquiring the mill based in Utah meant it no longer had to spend up to eight years seeking a permit and building a processing facility at its 100 per cent controlled Hansen/Taylor Ranch uranium project in neighbouring Colorado.

Managing director Mike Haynes said in a statement the acquisition would be transformational.

Mr Haynes said the company would now own one of only three licenced conventional uranium mills in the US.

"(This will provide) an accelerated path to uranium production. This vertically integrated model places Black Range in a very enviable position of strength, substantially differentiating us from our global peers," he said.

"We are thrilled to have reached agreement to acquire Uranium One's conventional mining assets in the USA and to have secured financing for the transaction."

As part of the mill acquisition Black Range will also receive about 250,000 pounds of stockpiled uranium ore.

In addition, Black Range has the option to start a joint venture acquisition with Uranium One that will over three stages lead to it having full ownership of a number of exploration and development projects spread across 77,000 acres in the US.

As part of its US$10 million initial payment Black Range will earn a 51 per cent interest in the Uranium One US assets to be spent on exploring, developing and operating them.