THE computer games industry is burgeoning, with recent figures from market analysts in the US quoting double-digit year-on-year growth, while a similar trend in Europe has continued developments that have been ongoing for several years. 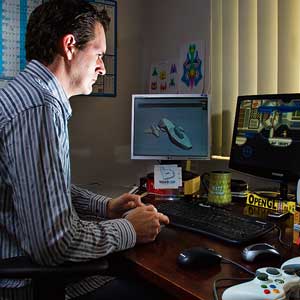 GAME ON: Paul Turbett hopes to take his Tuart Hill-based small business through to the next stage. Photo: Grant Currall

THE computer games industry is burgeoning, with recent figures from market analysts in the US quoting double-digit year-on-year growth, while a similar trend in Europe has continued developments that have been ongoing for several years.

In 2008, the Australian market, while still small by world standards, grew by nearly 50 per cent to about $2 billion.

Yet Black Lab Games founder Paul Turbett has struggled to obtain funding to develop original projects, forcing him to self-fund developmental projects, despite the inhibiting effect it would have on the growth of his Tuart Hill-based small business.

"Developing video games is what I've always wanted to do. I was introduced to computers as a teenager in the mid-1980s and took to them like a duck to water," Mr Turbett told WA Business News.

"I started writing games for fun, and that soon became something I wanted to do as a career. Black Lab Games isn't my first games company; it's more like my latest venture.

"It's a growing market ... games have become a major entertainment form, and the industry is huge. I was recently at the annual Game Developers Conference in San Francisco - it was attended by 17,000 professionals from around the world.

"This is in the midst of a global recession."

However, despite all of the positives as a growth industry, Mr Turbett said the games industry was not well understood in WA, making it difficult for businesses such as Black Lab Games to get off the ground.

"It is a rapidly changing industry, and quite different from WA's traditional industries, like mining and tourism. Starting a business is always tough, but as games are relatively new and don't completely fit the mould of established businesses, I think we face additional challenges," he said.

"Developing a game project requires investment. However, someone looking to invest in a company prefers to stick with what they know, which is fair enough.

"Because the games industry is not well understood in WA, I've found it's just about impossible to find local support.

"In 2005 I co-founded a game company called Benevolent Interactive. Despite having a contract with a US-based company to produce a game, we found that nobody we spoke to about the company wanted to get involved.

"I found the agencies that small businesses usually turn to for assistance weren't really able to help.

"Games are increasingly becoming part of mainstream culture, as any entertainment medium does. Other forms of culture like the arts, film and sport have government-funded bodies to assist their industries.

"Not to single anyone out, but if a filmmaker wants to make a film, they can approach ScreenWest and it's likely there will be some form of assistance available.

"Certainly they won't have the film funded, but even assistance with concept development or some travel costs could potentially be the difference between getting a project off the ground or not, in turn providing employment to local talent.

"Despite being involved in a growth industry with considerable commercial potential, game developers have no such support. There is no equivalent agency, like a GamesWest."

Mr Turbett said while contract-based fee-for-service work meant the company would probably survive, it did mean it would grow at a slower rate.

"Fee-based work is limited by the number of man-hours available," he said.

"However, when you are able to commercialise a product you have built yourself, you are only limited by the number of potential customers that own the devices the game is made for.

"It's giving the company a better chance of success in the longer term.

"The business cannot really grow until it produces successful original products. Even if this takes more time that it could, getting to that stage is the key."