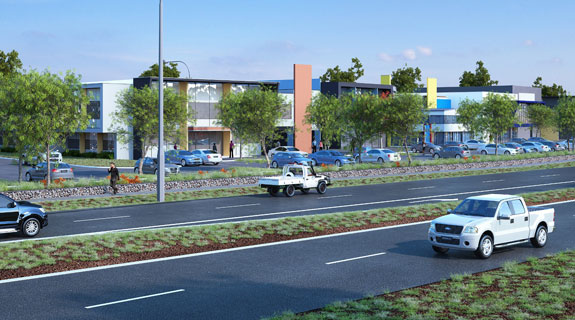 An artist's impression of the Crossroads estate.

LandCorp has released the biggest lot at its Crossroads Industrial Estate in Forrestdale to market, with the agency expecting significant demand from both owner-occupiers and developers for the site.

The 8,158 square metre lot is part of the 41-hectare Crossroads estate, which is an element in the Forrestdale Business Park and is the first land under LandCorp’s Stage 2B release.

LandCorp acting chief executive Kerry Fijac said all of the serviced commercial lots in stage 1 were sold within a fortnight, while 25 per cent of stage 2A lots were sold in the first three weeks.

“Lot 257 is located at the future entry of the wider Forrestdale Business Park West, with dual road frontage,” she said.

“This provides a strong street profile with good long-term exposure.”

High-profile tenants at Forrestdale Business Park include Hitachi, which is building a $100 million facility, Bunnings, Caltex, Masters and Storage King.