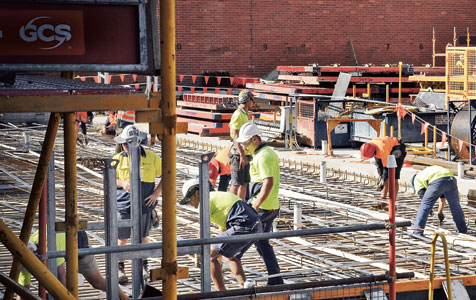 Commercial real estate was the standout for Chinese investment in 2014.

Dramatic structural changes have driven strong shifts in the types of deals being made by Chinese investors in Australia. For the first time, nearly half of investment was concentrated in commercial real estate transactions, with investment in infrastructure also increasing significantly, according to a new report.

Also for the first time, Chinese private sector investment exceeded state-owned enterprise investment, both in terms of volume and value.

New South Wales attracted a staggering 72 per cent of total Chinese investment, with seven of the eight largest completed deals in 2014 being NSW domiciled. Western Australia attracted 12 per cent, with Queensland and Victoria each with 8 per cent.

Despite ongoing community interest, there were only a handful of small-to-medium sized agribusiness sector investments during 2014, accounting for only 1 per cent of the annual total. However, 2015 looks like it could be a more active and promising year for the sector.

These are among the key findings of the latest Demystifying Chinese Investment in Australia report by KPMG Australia and the University of Sydney China Studies Centre, analysing Chinese outbound direct investment into Australia in 2014. The report includes a specialist contribution from Knight Frank, analysing the unprecedented increase in commercial real estate investment during the year.

In 2014, China became a global net foreign investor for the first time, with total outbound direct investment volume rising by around 11 per cent to $US120 billion. Although Australia maintained its standing as the second largest recipient country of aggregated global Chinese direct investment, behind the US in first position, for the second consecutive year Chinese investment in Australia declined.

Overall, Chinese investment in Australia fell 9.1 per cent for the 2014 calendar year, from $US9.19 billion to $US8.35 billion. The major reason for the decline was a downward trend in new mining and energy sector investment.

“It is not surprising to see that Chinese companies’ investment destinations are changing, from resource rich developing countries to developed countries providing access to advanced technologies, established brands, extensive industry experience and worldwide distribution networks. While the trend away from resources has led to a decline in Chinese investment in Australia, the trend towards real estate, leisure, advanced technologies, food and services works in Australia’s favour for the longer term,” said report co-author, Doug Ferguson, head of KPMG Australia’s Asia Business Group.

The report points to a number of significant positives and opportunities in what the authors describe as a ‘new normal’ of Chinese outbound direct investment in Australia – diversification into new sectors including real estate, infrastructure, leisure and tourism and food, which is being led by Chinese private sector companies.

“In our 2013 annual update report, we observed that Chinese direct investment in Australia had reached a turning point away from resources towards real estate, infrastructure, and consumer sectors. This trend has continued in 2014,” said Hans Hendrischke, Professor of Chinese Business & Management, China Studies Centre at the University of Sydney Business School.

“Under this ‘new normal’ scenario Chinese companies are expected to continue to invest over $US90 billion into Australia in the next decade.”

He said that the key investment areas for this would be energy, infrastructure, real estate, leisure and tourism, technology, services, and food and agribusiness.

Chinese direct investment in Australia was mainly focused on commercial real estate (46 per cent, up from 14 per cent in 2013), infrastructure (21 per cent) and for the first time, a material investment in the tourism and leisure sectors (12 per cent). Mining represented 11 per cent of investment (down from 24 per cent the previous year), with energy at 7 per cent. Manufacturing and agribusiness remained flat, attracting 2 per cent and 1 per cent respectively.

Commercial real estate was the standout for Chinese investment in 2014.

According to the report, Chinese investment volume in commercial real estate nearly quadrupled in one year to $4.37 billion.

“In turn, this has led to increasing investment levels in gateway markets globally – particularly in Australia,” said Matt Whitby, Knight Frank’s Group director, head of research and consulting. “The total value of Chinese outward real estate investment globally skyrocketed from $US600 million in 2009 to $US16.9 billion in 2014 – 10 per cent higher than 2013 and a substantial 205 per cent increase from 2012. Already over $US7.8 billion of commercial real estate has transacted in the first four months of 2015.”

“After heavy investment in prime office buildings and subsequent yield compression in gateway cities, Chinese investors have begun to look increasingly at opportunities in other key cities and other property sectors, and importantly, in suburban locations in metropolitan Sydney, Brisbane and Melbourne – not just within the CBD and fringe markets. In the commercial sector, retail and hotels will start to garner more interest following relatively subdued activity over the past few years by comparison to residential development sites,” added Mr Whitby.

Infrastructure. Many large and experienced Chinese companies have shown genuine interest in investing in Australian infrastructure. Three major infrastructure deals accounted for 20 per cent of the total 2014 investment value with the largest single Chinese investment in the year being the acquisition of John Holland by CCCI for an enterprise value of approximately AUD 1.5 billion, followed by the Newcastle Port investment by China Merchants Group and Hastings Funds Management.

Leisure and Retail. Another new trend reflecting China’s domestic reorientation towards social consumption and consumer oriented services is outbound investment in the leisure sector. Twelve percent of Chinese direct investment was recorded in the leisure and retail sector during the year.

Mining, Energy, Oil and Gas. The proportion of investment in mining continued to decline from 23 per cent of total value in 2013, to 11 per cent in 2014. For reasons that are well known, there is little prospect for major growth in the short term.

Agribusiness. Despite ongoing community interest, there were only a handful of small-to-medium sized agribusiness sector investments during 2014, accounting for only 1 per cent of the annual total. However, 2015 looks like it could be a more active and promising year for the sector.

NSW stood out as the top destination for Chinese direct investment in 2014, attracting 72 percent of Chinese investment. Western Australia attracted 12 per cent, with Queensland and Victoria each with 8 per cent. Seven of the eight largest completed deals were NSW domiciled.

“Mega sized deals traditionally occurred in the mining and resources sector. The fact that in 2014 such deals were also concluded in construction and leisure sectors is a sign of maturing and globalising investment from China, which bodes well for Australia as an investment destination,” added Mr Ferguson.