The move by Gina Rinehart and Andrew Forrest into beef production may ultimately be more about the land they own than ‘feeding China’. 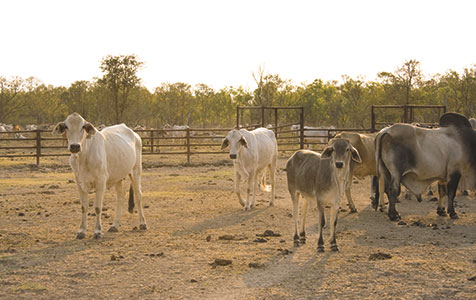 The move by Gina Rinehart and Andrew Forrest into beef production may ultimately be more about the land they own than ‘feeding China’.

The mining world is going soft. Not in the sense of getting weaker, but in diversifying to try and catch the next hot commodities theme.

However it seems unlikely that ‘soft’ commodities, such as food and fibre, will prove as profitable as minerals and metals.

Locally, the push into ‘softs’ is being led by two of Western Australia’s richest people, with Gina Rinehart and Andrew Forrest investing in beef production by adding pastoral properties to their already bulging asset portfolios.

Internationally, Rio Tinto has quietly added potash to its asset register via a joint venture with a Russian partner in a Canadian project, located not far from the Jansen potash development of archrival BHP Billiton.

Potash has just one use, as fertiliser for use on soils deficient in potassium – one of the major crop nutrients alongside nitrogen and phosphorous.

What’s driving these wealthy miners and the corporate mining giants into the agricultural sector is a belief that the next great growth sector after ‘building China’ will be ‘feeding China’.

The theory is a good one, but as anyone who has ever dabbled in agriculture knows there are low barriers to entry; and when prices rise for a particular commodity, production can rise even more rapidly.

Australia’s wine lake, the wool mountain of a few years ago, and the occasional grain glut are reminders of how supply can quickly swamp demand, which is one reason why there are not as many rich farmers as there once were.

The trick to agricultural investment, and this seems to be the approach of Rinehart and Forrest, is to not worry too much about what is produced on the land; it’s the ownership of the land, or selling inputs such as fertiliser to farmers, where the real money is made.

The inputs approach is identical to the theory of selling ‘pick-axes’ to miners, which has always been a better way to make money in a mining boom than actually digging up the minerals.

A good example of how not to invest in agriculture can be found in another rich WA family – the Holmes a Courts.

Once owner of a vast array of cattle stations, the Holmes a Court family discovered that producing beef is a devilishly difficult pursuit. If it’s not drought or disease that sets you back, it’s floods. And if nature doesn’t kill the business, government policies will.

Even the potash investments of BHP Billiton and Rio Tinto are not guaranteed to be successful diversifications for the two big miners for the simple reason that there is not a global potash shortage, nor is there likely to be in the foreseeable future thanks to vast deposits in North America and Eastern Europe – plus the fact that if the price picks up, so too will exploration, followed by discovery and development.

The fact that Rio Tinto has revealed its previously private 50-50 joint venture with Russia’s Acron group is an example of how the potential future supply of potash has suddenly increased even as the price of the fertiliser falls.

For private investors, the lure of adding soft commodities exposure to a portfolio is strong, if only because rich people are doing it.

But the key to a successful soft commodities strategy is finding an entry point that is not excessively risky, and that means ticking off a longer list of risks than mineral investing.

For proof of that point, ask a friend who invested anytime in the past 10 years in a South West vineyard and you will discover just how difficult it is to make money in an oversupplied market.

Ownership of high-quality agricultural land is the safest entry point into the world of soft commodities, which is probably what Rinehart and Forrest are doing, rather than worrying too much about the beef to be produced.

The second best entry point is to sell inputs such as fertiliser and essential equipment to farmers.

As for being a farmer, or the producer of anything that’s alive (or anything which is easy to grow) – forget it.

IF finding an entry point into soft commodities is tricky, then finding a financial adviser who (a) you trust, or (b) who knows what he/she is talking about is just as tricky.

What happened to clients of the financial advisory arm of the Commonwealth Bank of Australia who were given lousy advice, and then buried by the bank’s appalling cover-up, could well be the tip of a very nasty iceberg.

The problem at the Commonwealth, where rogue advisers rapidly depleted the savings of clients by directing them into dud investments, is almost certainly not an isolated case.

However, like most big blunders it was also a situation in which more than one person made a mistake, with incompetent advisers getting away with their bad advice because the owners of the money weren’t paying sufficient attention.

The real issue behind the failing of certain Commonwealth Bank financial advisers is that they were seeking unrealistic investment returns in an era of low interest rates, and the clients were willing participants in that fruitless search for above-average yields.

Cautious investors have seen it all before and have learned that if you try to earn 10 per cent on an investment at a time when the average rate of return is 5 per cent you might get away with it for a while, but you will get burned over time.

Speaking of high returns on investments, there seems little doubt an awakening is under way at the bottom end of the resources sector with a number of stocks recently delivering ‘double-your-money-in-a-day’ performances.

In some cases that means a share-price rise from 1 cent to 2 cents, in others it’s a bit more impressive with 5-cent stocks rising to 15 cents – 200 per cent in a week.

As tempting as it is to join the game, there are reasons to take care.

Firstly because it is hard to pick the next winners from around 600 potential small stocks overdue for an uplift, secondly because the uplift could be very short lived, and thirdly because most people playing the penny dreadful revival game forget that, with most easy profits comes an obligation to pay tax.