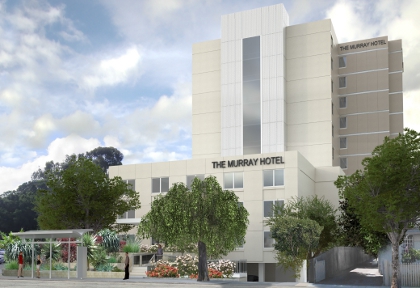 An artist impression of the expanded Murray Hotel.

A West Perth hotel is planning to expand the number of its rooms from 30 to more than 100 as latest figures show continued high demand for accommodation in the CBD area.

The Murray Hotel, located across the road from the Princess Margaret Hospital, has submitted a development application to the Perth City Council to significantly increase its rooms to 109.

Owner Kate Sinfield told WA Business News the 3.5-4 star hotel needed to be updated from its 1960s exterior, and with demand for accommodation high in Perth, it was decided an expansion was the best way forward.

“Most of the new hotels coming online are all 5 or 6 stars and there’s a huge need for 3.5 and 4 star hotels, which is where people just want good quality, clean and comfortable accommodation that’s affordable,” she said.

Ms Sinfield added there was a huge need for that in West Perth for business people, and also for those that needed somewhere to stay when visiting Princess Margaret Hospital.

The hotel will find out next month if it can go ahead with its plans, and Ms Sinfield said she was talking to companies in Melbourne and Thailand about pre-fabricated construction that will see the expansion completed quicker, with a target end date of May 2014.

The expansion plans come as new figures from the Australian Bureau of Statistics show room occupancy rates in the Perth CBD area reached 85.9 per cent.

“In the September 2012 quarter, Perth CBD and Geraldton recorded hotel occupancy rates of 85.9% and 83.4% respectively, while in tourism regions, such as Margaret River, it is a very different story,” AHA chief executive Bradley Woods said.

“The South West recorded an average hotel occupancy rate of 45.3% according to the latest ABS report released today.”

Tourism Council WA is calling for more government investment in the tourism regions, or risk losing market share to other states.

“There’s more to our economy than digging holes in the ground and it’s time for the government to make tourism and events a state priority,” the council’s chief executive Evan Hall said.