Soaring valuations for tech companies and mining stocks have brought major shifts in this year’s list of WA wealth creators. 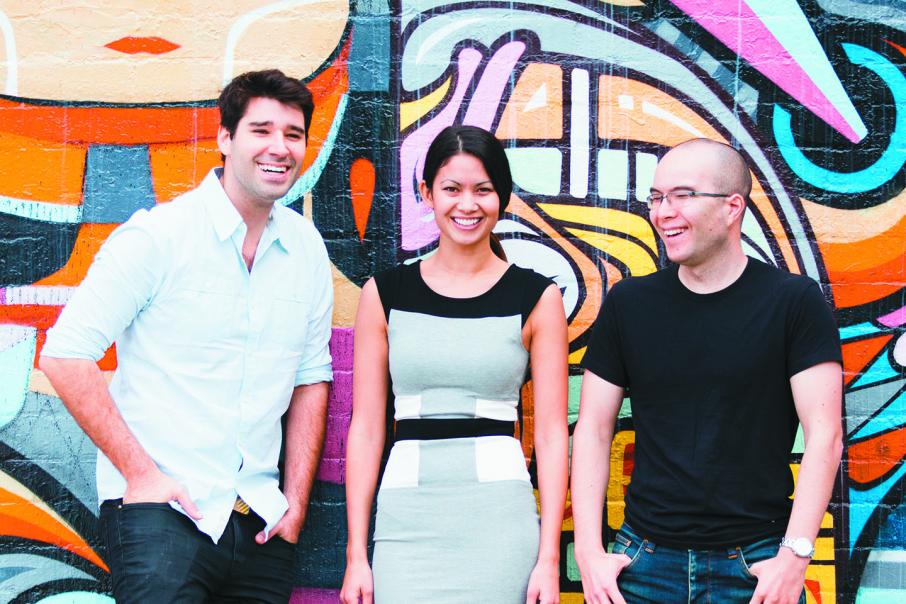 Mrs Rinehart is considered Australia’s wealthiest person; that ranking was confirmed when her flagship company, Hancock Prospecting, recently announced a near doubling in net profit to $7.7 billion for the year to June 2021.

Business News has estimated Mrs Rinehart is worth $30 billion.

It is also based on valuations of ASX-listed iron ore miners, most notably Fortescue Metals Group.

Fortescue shares are currently trading around $17.30, which values founder and chairman Andrew Forrest’s 36 per cent stake at $19.5 billion.

Just a few months ago, the share price jumped as high as $26.58, which valued Mr Forrest’s stake at $30 billion.

That’s an extraordinarily wild swing and a reminder of why people aiming to build long-term wealth should not worry about short-term pricing fluctuations.

As a result of owning 1.13 billion Fortescue shares, Mr Forrest has received dividend payments totalling more than $7 billion in just the past three years.

Such large dividend payments to an individual are totally unprecedented in Australia.

Most of that money has been reinvested and largely explains why his private company, Tattarang, has been growing at an extraordinary rate through acquisitions and new business ventures.

Putting together the value of Mr Forrest’s shares and recent dividends, it’s easy to reach a conservative estimate of his wealth at $26 billion.

Mrs Rinehart has not benefited to the same degree from dividends, but that will change.

Her company has paid discretionary dividends of $818 million over the past six years.

More significantly, it has set aside a further $4 billion for dividends, subject to the resolution of legal disputes between Mrs Rinehart and her children.

Another regular on the list of wealth creators is Kerry Stokes, who’s worth an estimated $6.4 billion.

This is primarily tied to his stake in listed company Seven Group Holdings, which is little changed from where it was one year ago.

Mr Stokes’ holdings in listed companies are worth about $5 billion (see graphic) and like other long-term rich listers he has had ample opportunity to build extensive private investments hidden from the public gaze. 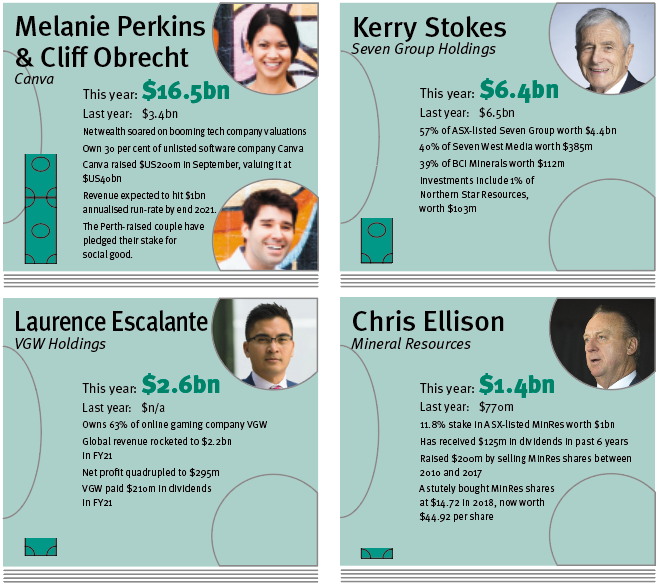 Canva founders Melanie Perkins and Cliff Obrecht are worth $16.5 billion, five times what they were worth a year ago, according to data released by the company, which is 30 per cent owned by its married founders.

Canva said it was worth a total of $US40 billion ($A55 billion) based on the pricing of its latest capital raising.

That’s amazing for a company that still hasn’t turned a profit, although that’s hardly a problem in the tech world, where companies can attract increasingly high valuations linked to their revenue and growth prospects.

The Canva founders are based in Sydney but are included in this list because they grew up in Perth and their first business, Fusion Books, was started here.

With people around the world stuck at home during lockdowns, many chose to spend more time gaming online.

VGW was a big beneficiary, with its annual revenue rocketing to $2.2 billion, it’s profit quadrupling, and its annual dividend jumping to $210 million.

The end result is that Mr Escalante has an estimated personal wealth of $2.6 billion.

The dizzying ascent of the tech entrepreneurs makes the $1 billion-plus fortunes of mining figures like Chris Ellison, Mark Creasy and Tim Goyder look like a tough grind.

Mr Ellison is conservatively worth $1.4 billion, with most of his fortune tied to his 11.8 per cent stake in ASX-listed Mineral Resources.

The company’s share price is up strongly from one year ago, currently trading about $40.

The price soared above $60 in July on the back of booming iron ore prices but, like those of its peers, the company’s share price has come down sharply since then.

He has also benefited from astute trading over the years, for instance by purchasing MinRes shares at just $14.72 in 2018.

Another experienced campaigner who has had a good year is famed geologist Mark Creasy.

His biggest investment is a 9.4 per cent holding in battery metals producer IGO, worth more than $800 million.

Like many of Mr Creasy’s investments, that stemmed from the sale of a project (the Nova nickel mine).

He played a role in its discovery.

He is worth an estimated $1.1 billion, putting him just ahead of Mr Goyder.

Mr Goyder has had a few good wins over 40 years of investing in junior miners, but nothing compares to his success during the past two years.

He is a 10.8 per cent shareholder in Chalice Mining, whose Julimar nickel-palladium discovery is ranked as one of the great finds in WA.

Its share price has gone from 20 cents to about $9 over the past two years.

Mr Goyder also holds a 17 per cent stake in Liontown Resources, which is riding the strong recovery in the lithium market.

He is one of just a few company directors to have made their fortune in property.

The low weighting to property says a lot about the importance of mining in WA.

It contrasts with The Australian’s most recent rich list: its national survey found nearly a quarter of the top 250 made their money in property.

The listing of APM crystallised Ms Wynne’s holding in the company, currently valued at about $530 million.

Similarly, Murray Leahy – the founder of Goldfields’ mining services business MLG Oz – has entered the list with a shareholding worth $63 million.

He has joined the likes of Luke Mader and David Riches, who listed their successful contracting businesses in recent years.

Both had good years. Mr Mader’s stake in Mader Group has more than doubled to $240 million, while Mr Riches’ stake in GenusPlus has risen to nearly $120 million.

With backing from Mrs Rinehart, investors have enthusiastically supported the company’s plan to develop a lithium project in Germany.

The company’s market value has gone from $13 million to $190 million, with the trigger being a deal to sell its stake in a big iron ore deposit to MinRes.

Mr Pitt has already been paid a $24 million cash dividend and holds shares worth about $65 million.

However, not everyone has fared as well.

One of the biggest losers last year was Seafarms Group director Ian Trahar, whose stake in the company has more than halved in value to less than $50 million.

For all the people seeking to build new wealth, there is a small but very significant cohort in WA that can be categorised as ‘old money’.

It includes people who have staggering fortunes because of the business acumen of their parents and grandparents.

Their company, Wright Prospecting, posted a net profit last year of $297 million on revenue of $435 million, with nearly all of that coming from iron ore royalties. 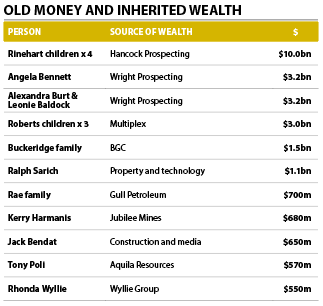 There is very little public information on how this money is used, other than some philanthropic donations by Ms Burt.

Nonetheless, Ms Bennett is estimated to be worth $3.2 billion and her two nieces the same.

Hancock Prospecting generates similar revenue from royalties, though that gets somewhat lost in the much larger revenue Hancock generates from its own operations.

Mrs Rinehart’s four children – John Hancock, Bianca Rinehart, Hope Welker and Ginia Rinehart – are estimated to be worth about $2.5 billion each via their 23.45 per cent stake in Hancock Prospecting, held via the Hope Margaret Hancock Trust.

Other families with inherited wealth include the Roberts, Buckeridge and Rae families.

Other examples of old money include Ralph Sarich, Jack Bendat and Rhonda Wyllie, whose money was made years ago.